I see Fidel Castro look-alike Paul Ehrlich continues to dish out advice even as he approaches his eightieth year.  He sternly warns of Global Warming. It seems that within a decade or two England will be a desert, while tourists will bask on the beaches of Svalbard, beneath whispering palms, bathed in a sub-tropical sirocco breeze. And based on this advice I immediately placed my order for a warm house in the middle of the Sahara. Because when Paul advises shrewd investors act.

And do the polar (heh!) opposite.
You see the good doctor’s prognostications have up to now been, well, mixed. In fact make that utterly, totally and hilariously wrong. To wit in 1970 (The Population Bomb) he warned of imminent world-wide mass starvation, that England would cease to exist as a country by the end of the 20th century as famine stalked the land. In 1974 he predicted a new Ice Age as being just around the corner. Then, without  skipping a beat changed his mind and said well no, actually I mean Global Warming is going to finish us off.  And soon.
Ehrlich is far from being alone. The Inconvenient Truth about Al Gore is that in 2006 he told us that we’d all be living “in a frying pan” within ten years. How did that work out Al? In 1970 Dr. George Wald of Harvard was awarded the Nobel Prize for warning us that “civilization will end within 10 to 15 years” short of taking dramatic and unprecedented measures. Which of course never were taken. There are dozens of other hucksters out there now peddling similar nostrums, this time based on the Global Warming wheeze.
Serious question: How do these guys get away with being totally wrong again and again? More pertinently how do they continue to get away with it?  It’s complex, so maybe we need one of those brilliant black doctors and scientists we see on TV to explain it to us? Either way, my own theory is that the GW hoax represents a perfect vehicle for propagating the globalist/NWO agenda. Listen to uber-bitch Mary Robinson on the New York Slimes  “we need to secure an international legally binding climate agreement because climate change cannot be solved at the national level alone.”
Am I right?

You are right on, Savant. Right on. Ohhh… he didn’t mention that Ehrlich is Jewish. Part of that group of academics (most, actually, if they want to get and keep an academic job) that sell the global Jewish elite’s propaganda line of the moment. Again I state that I am not anti-Jewish per se and my Jewish friends know this. Just anti those who think those in this world and the world itself are for their own use, control and abuse, and have done so for millennia. And those Jews and non-Jews alike who are willing to sell their souls to these horrific people. Just map Ehrlich’s prognostications over the years and you see the pattern as clearly as the back of your hand.

The Wilkomirski Affair: How a Holocaust Hoaxer was Rewarded for his Lies

And whilst I’m rattling this horrific cage of lies, this just turned up in my email:

The story of the impostor “Binjamin Wilkomirski” has been generally well known for almost two years, but new revelations were coming out as late as last fall. I think there are some aspects of it that deserve added stress and contemplation. There is more here than the tale of a con man being nabbed.

In 1996 a book appeared, authored by Binjamin Wilkomirski, entitled Fragments: Memories of a Childhood 1939-1948. It had been published the previous year, in its original German. In this book the author related that he was born a Jew in Latvia and was separated from his parents at age three, was sent to German concentration camps, to Majdanek, then Auschwitz, where he endured a living hell. Liberated at the end of the war, he was adopted by a Swiss family named Dössekker, from which he took the name Bruno Dössekker.

His memoirs, which immediately won wide acclaim, were promoted by the US Holocaust Memorial Museum and won the National Jewish Book Award for 1996. In France his book won the Prix Mémoirs de la Shoah, and in Britain the Jewish Quarterly literary prize.

Eventually his tale was supported by a woman named Laura Grabowski, who said she was also a Jewish survivor of Auschwitz and remembered Wilkomirski: “He’s my Binji, that’s all I know” she said.33 She had her own tale of suffering at Auschwitz at the hands of Josef Mengele and other Germans, and the scars to prove it. Wilkomirski and Grabowski went on lecture and concert tours individually and together.

Raul Hilberg appears to have been an early skeptic. Swiss Jewish journalist Daniel Ganzfried heard rumors that Wilkomirski’s story was not true. He investigated and determined that the Latvian Jew “Binjamin Wilkomirski” was actually a Swiss gentile, born on February 12, 1941, to an unwed Swiss mother named Yvonne Berthe Grosjean, and later adopted by the Dössekker family. He was never incarcerated at Auschwitz. Ganzfried’s expose was published in the Swiss weekly Weltwoche during August and September 1998. Wilkomirski subsequently refused to submit to a DNA comparison with Max Grosjean, Yvonne’s brother.34

Laura Grabowski was exposed as a fraud in October 1999 by the Christian magazine Cornerstone. Her real name was Laurel Rose Willson, born to Christian parents on August 14, 1941, in Washington state, and of course she was never incarcerated at Auschwitz. She had earlier written books under the name Lauren Stratford, claiming she had suffered ritual satanic abuse, citing the same scars which she later claimed were inflicted by Mengele. (The scars were apparently self-inflicted.) As such she appeared on talk shows such as Oprah to relate her ordeals. When she decided that she would also be Laura Grabowski, she transposed the stories of ritual satanic abuse to the new setting Auschwitz.35

An important observation is that the downfalls of Dössekker and Willson did not come about because their claimed experiences were determined to be phony. Though Ganzfried and others thought there was something fishy about Wilkomirski’s story in itself, for example, his claim that as a lone Jewish child, four years old, he was able to survive the “Holocaust,” they were nailed on the issue of identity. They are gentiles who were not in a German concentration camp during World War II; they only visited them years later.

They are contrasted for example to Elie Wiesel, who cannot be discredited on the basis of identity, since he is a Jew who was actually interned at Auschwitz. Against Wiesel’s concoctions society has yet to develop an effective defense, by listening to revisionists instead of its current leaders.

Wilkomirski’s Fragments is no more or less plausible, in itself, than Wiesel’s Night. For example, Wiesel admitted in Chapter 5 that, when the Germans evacuated Auschwitz, he had the option of staying at the hospital, with his father registered as a patient, to await the Soviets. He chose rather to join the evacuation, taking his father with him, on a predictably difficult journey to another German concentration camp. That is as implausible as anything in Wilkomirski’s book if one is to believe Wiesel’s tale of the horrors inflicted by the Germans at Auschwitz.

We all so want to believe that nobody could be so evil that they would go to any lengths to control the world for their own ends, including lies, deceit and murder by the millions. Sadly, it is true, and we are all inside their propaganda, which fashions our beliefs; and we take those beliefs to be ourselves, so when somebody attacks our beliefs, we take it to be an attack on us.

They understand us very well and almost all of us are stuck to their fly paper, living the illusion as if it were true.

The West’s media—under orders to censor any news of Jewish supremacism—has refused to publicize this week’s massive hate rally attended by thousands of Jews in Tel Aviv which called for all Arabs to be killed.

The Western media’s blackout is in marked contrast to their blanket coverage of the tiniest example of what it calls “white racism.”

The Tel Aviv rally—organized to support an Israeli soldier who murdered a wounded Palestinian by shooting him in the head as the victim lay on his back—was marked by chants and banners calling for mass murder.

The rally took place on Tuesday evening, April 19, in Tel Aviv’s Yitzhak Rabin Square, and the many thousands of Jews in the crowd were, according to reports in the Israeli media, baying for blood.

One Jewish reporter, Dan Cohen, tweeted that many in the crowd chanted, “Death to Arabs,” a frequently heard rallying cry at anti-Palestinian demonstrations.

Ahmed Tibi, a Palestinian lawmaker in Israel’s parliament, posted an image of a sign displayed at the rally reading, “Kill them all.”

This blatant “double standard” is widespread but goes without comment in the MSM.

Just like Bibi’s wall to keep the migrants out of precious Israel, whilst they foster their invasion of Europe and they conduct genocide of the black African Jews from Ethiopia and elsewhere.

But let’s all sleep on. Remember, we terrible Europeans killed 6M Jews in WWII…

Except neither the collective goyim “we” nor Hitler on our behalf did no such thing. But don’t say so in a growing number of countries or you’ll go to jail.

This image kinda gets it. 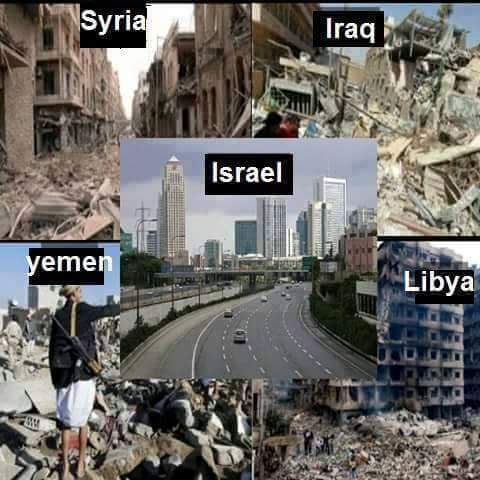