Yes, Jews ARE the victims – of Zionist propaganda

I agree with the thread of Alan Hart’s article:

My headline takes me back 35 years to the day when I had a remarkably frank (honest) conversation in Tel Aviv with then retired Major General Shlomo Gazit, the very best and the brightest of Israel’s Directors of Military Intelligence. I put to him my conclusion that “It’s all nonsense.” I meant and said that contrary to the assertions spewed out by its leaders, Israel’s existence had never, ever, been in danger from any combination of Arab and other Muslim military force and was never likely to be. Through a sad smile Shlomo replied, “The trouble with us Israelis is that we’ve become the victims of our own propaganda.”

In reality the problem is much bigger than that because most Jews everywhere are  victims of Zionism’s propaganda.

On most days of most weeks of most months the Israeli who makes the most outrageous and ridiculous propaganda statements about threats to Israel’s existence is Prime Minister Netanyahu. But  leaving aside his assertion that the Mufti of Jerusalem was more responsible for the Nazi holocaust than Adolf Hitler, the most outrageous and ridiculous Zionist statement of recent years was not made by him. It was made by Dr. Ben Chouake. Who’s he?

This gentleman is the president of NORAC, a political action committee which works to strengthen Israel’s relationship with America. It is also the agency which distributes much of the money raised by the Zionist lobby in all of its manifestations to fund the election campaigns of those seeking election to Congress and who are prepared to put Zionism’s interests before those of their own country.

Last year in a statement to the National Journal Chouake asserted that with nuclear weapons “Iran wants to do to the Jews in 12 minutes what Hitler did in 12 years.”

That statement has no relationship whatsoever with reality.

Even if Iran did possess a few nuclear bombs the notion that it would launch a first strike on Israel is crazy in the extreme. If it did Iran would be destroyed in a counter-strike. Its leaders know that, and unlike some of their counterparts in Israel they are not mad.

More to the point is that the intelligence services and other security agencies of all the major powers know that Iran is not developing nuclear weapons and does not want to possess them. And over the last few years there have been indications that most of Israel’s security chiefs and top military people know this, too.

The question arising is this.

Why, really, does Zionism put so much propaganda effort into making Jews everywhere believe not only that they are victims today but will remain so for ever?

The answer is obvious.

It’s the only way Zionism can prevent most Jews everywhere from stopping for a split second to consider the truth of history as it relates to the making and sustaining conflict in and over Palestine that became Israel.

This truth, which includes the fact that Israel was created mainly by Zionist terrorism and ethnic cleansing and is today continuing the ethnic cleansing process slowly and by stealth, is not to be considered, even for a split second, because of the conclusion it invites (I say demands)  – that Israel is the oppressor not the victim.

In my view it follows that all Jews everywhere who support Israel right or wrong and/or remain silent in the face of its defiance of international law and denial of justice for the Palestinians are complicit by default in Zionism’s oppression.

The upshot of Zionism’s brainwashing propaganda is not only that  most Israeli and very many other Jews regard themselves as victims, more to the point is that they are beyond reason on the matter of justice for the Palestinians.

From personal experience, I have come to understand how powerful this process is. Many well-meaning Jews are completely blinded to the truth of their history. In this, they are just as deceived as non-Jews. But they can’t see it. There are exceptions, such as Gilad Atzmon or Henry Makow or Shlomo Sand, but they are rare.

And the scale of this deception is far greater than Alan Hart perceives, as I have explained.

For example, few modern Jews have a clue that the Bolshevik Revolution of 1917 was a Zionist takeover of Russia. It is now well hidden. But there were press articles at the time such as this one from 1919: 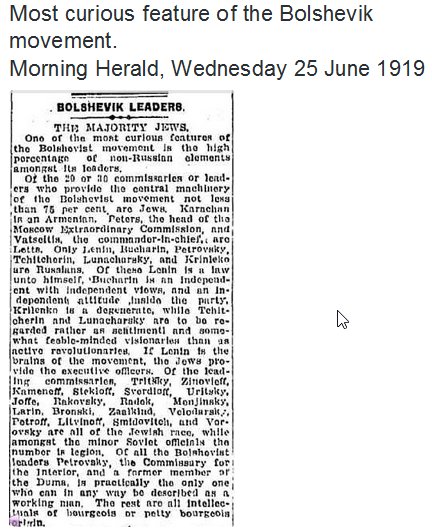 It is the most horrific deception in our world, and it is carefully hidden, and as Alan Hart explains, many Jews are the victims of this deception. But, in my experience, belief often prevents them from seeing it.

I must say, I have to begrudgingly admire the power of their propaganda. But then, Edward Bernays, the father of propaganda (and modern advertising) was Jewish.