There’s much that can be said about Adolf Hitler, but unless we can reconcile the truth expressed by Ken O’Keefe in these two short minutes, we cannot say we understand who Hitler was and what actually occurred during WWII. The history is long of the Jewish, satanic global bankers destroying and usually killing anyone who opposed their “god given” right to print the money used by everyone globally.
If you want to understand this, I recommend Bill Still’s Money Masters. It’s thorough, enlightening and entertaining, albeit long. But you can’t understand this world if you don’t understand what Bill shares with us.
Richard
Check out the extraordinary new, life-changing technology at www.magravsplasmaproducts.com

The Mystery of the One Bank: its Owners? – Jeff Nielson

If you want to understand who runs our world and how they’ve gone about it for centuries, you could do a lot worse than read this article. The heart of it is right there.

It gets deeply into the who and the how, though it does not get into the why. But understanding these first two – the globalist bankers and their minions – is an important step. And there are more threads tied back to the Rothschilds than this article spells out.

And it you doubt where the real power lies, this photo meme gives you a clear indication. 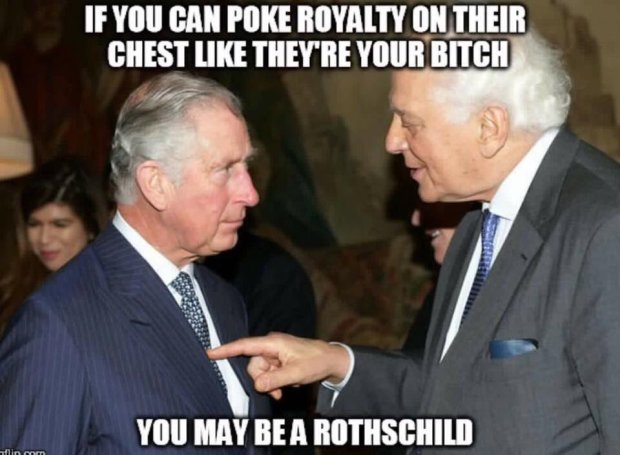 I commend the article to you.

I have previously quoted from Nick Kollerstrom’s book in my own research into the “holocaust”, and this article today by Jonas Alexis and Kollerstrom adds usefully to the picture, and I commend the article to you.

Simply put, if you examine the scientific evidence, there is simply no way that the extermination of 6M Jews by Hitler’s Germany could have happened or did happen.

However, what interests me more, today, is how our belief systems work, because to challenge this “truth” in the world is treated by most as heresy and in many countries will get you a jail term – which should be warning enough about its falsity.

Firstly, “Joe Average” simply believes, accepts and acts out of what they were taught or experienced growing up, via school, parents, friends, community, etc. and rarely does this change, short of a massive trauma or revolution in their personal or broader world. And this is used to great effect by those who run our world, owning, as they do, governments and the media globally.

But what of the so-called educated, the intelligentsia of our world? Do they – do you – actually move beyond these beliefs?

It is not unusual when we are in our early twenties, even thirties, to examine some of the elements our experience up to that time has thrust upon us and fine tune our perspective, after which it becomes, for most people, ossified for the rest of our lives, short of the kind of trauma I mentioned above.

And it is a natural process of the mind to find evidence to support those beliefs. It’s a natural confirmation of self, of identity, and we all need a clear sense of personal identity to function. And intelligent, questioning people are no different in this. If you find what appears to be a strong piece of supporting evidence for your belief, no amount of clear, unquestionable scientific evidence will sway you. And the holocaust is an absolute classic. Especially if you’re Jewish.

Indeed, it is my experience that people need some sort of trauma or crisis in their lives to trigger any questioning of this status quo. It is what usually precedes any serious level of spiritual inquiry, at least in the West.

And it is the nature of most of us to defend our beliefs and very often die for them, because we take those beliefs to be ourselves (e.g.  most people’s trust in and belief of the Western medical establishment, not knowing who created it and why). Those beliefs are not us, but that’s the reality most of us live inside. Only when we see our beliefs as like a set of clothes we happen to be wearing today and we can change them with the weather or the climate or when they wear out, and like fashion, there are those who make it their business to fashion your beliefs, just as they fashion what you are comfortable wearing.

Perhaps the best pointer to this I have seen are the New Order of Barbarians tapes. They are:

“recollections of Dr. Lawrence Dunegan regarding a lecture he attended on March 20, 1969 at a meeting of the Pittsburgh Paediatric Society.

“The lecturer at that gathering of paediatricians (identified in tape three recorded in 1991) was a Dr. Richard Day (who died in 1989). At the time Dr. Day was Professor of Paediatrics at Mount Sinai Medical School in New York. Previously he had served as Medical Director of Planned Parenthood Federation of America. Dr. Dunegan was formerly a student of Dr. Day at the University of Pittsburgh and was well acquainted with him, though not intimately.

“He describes Dr. Day as an insider of the “Order” and although Dr. Dunegan’s memory was somewhat dimmed by the intervening years, he is able to provide enough details of the lecture to enable any enlightened person to discern the real purposes behind the trends of our time.

This material is one of the extraordinary glimpses behind the curtain that occasionally show up on the Internet. It illustrates how much of what we take to be true has been fashioned by those who run our world. Sadly, the holocaust lie has been very effectively planted and reinforced by those forces for their own purposes. And as you read this, you are most likely to be amongst those who take it to be true, though I know some of you do not.

An investigation of Deutsche Bank’s “Passion to Perform” balance sheet provides the clues.

The above clip from Deutsche Bank’s First Quarter 2016 Statement.

Zero Hedge commented on the World’s Most Systemically Dangerous Bank.

Effectively the market suggests Deutsche Bank is worth 75% less than book value. Why?

Brexit is the easiest explanation to throw out. Share prices started collapsing a second time starting at the beginning of 2014.

The bank has always been heavy in derivatives. Although recent activity may have led to losses or more scrutiny, it’s relatively easily to discard that as the primary answer.

Instead of pondering the obvious problems, what about other things?

My best guess is that Deutsche Bank share prices reflect all of the above but something in the second set of reasons, or something we still do not fully understand is the primary reason behind the collapse.

The American Revolution, Part II: Who Wrote the Declaration of Independence?

James Perloff is a thoughtful and thorough researcher and author. As July 4th is on our doorstep, Perloff’s recent article is timely and hangs a few myths of history out to dry:

Paine (1737-1809) was a British author of anonymous pamphlets. In England he met Freemasonic Grand Master-at-large Benjamin Franklin (who served not only as Grand Master of Pennsylvania, but Grand Master of the Nine Sisters Lodge in Paris, as well as attending Britain’s satanic Hellfire Club). When Paine traveled to America, Franklin gave him a letter of introduction. He arrived on November 30, 1774, greeted by Franklin’s physician. This was less than five months before the orchestrated Battle of Lexington, flashpoint of the Revolutionary War.

I commend Perloff’s article to you.

The destruction of Palestine by Israel

The animated GIF on this page illustrates the demise of Palestine at the hands of Israel – or, more accurately, those who created Israel – over the last 100 years better than anything else I’ve seen.

All carefully planned. And the Palestinians are the terrorists if you listen to the MSM.

Whatever else you may think, this is simply the genocide of an innocent people.

And as I’ve said many times, the Al Aqsa mosque will be knocked down, soon.

Just watch and wait. All else being equal, I give it five years max.

I wonder if there’s an order on high that the Israeli firm ICTS handles airport security globally, along with other key “targets”?

They turn up at these “terror” events even more often than they’re held at properties associated with Frank Lowy’s Westfield. In the case of 9/11, they were both involved.

A security firm from Israel linked to numerous false flag terror attacks handled the security at the Istanbul airport where 42 people were killed on Tuesday.

ICTS was founded by “former” Israeli intelligence agents, and has a major presence all over the world in airport security. The company came under the public spotlight when it emerged that its staff “missed” several of the 9/11 hijackers who flew out of Boston’s Logan airport on September 11th 2001. The same Israeli security team also handled security for London’s bus network during the 7/7 London bombings.

The company offers a system based on a computerized algorithm called APS (Advanced Passenger Screening) that analyzes passenger information procured by airline companies and determines the potential risks posed by a given passenger. APS is used by most of the large airlines in the United States.

The chairman of the supervisory board at ICTS is Menachem J. Atzmon. Atzmon is a former Likud party member and was indicted and convicted in 1996 in a fraud and embezzlement case relating to the misappropriation of funds raised by charities. Atzmon owns more than 60% of ICTS Intl. through a family trust.

What’s that Mossad motto again? Oh, yes… : By Way of Deception, Thou Shalt do War

The graphite was hardly dry on the Brexit ballots when TVP Info, a Polish broadcaster, leaked a 9-page document drawn up by the German and French foreign ministers calling for an EU superstate complete with an EU army, integrated border controls and common taxation. The German foreign minister discussed the plans — which are being described as “an ultimatum” — with his counterparts in the Visegrad Group of countries (Poland, the Czech Republic, Hungary and Slovakia) this week.

The document, bearing the Orwellian title of “A strong Europe in a world of uncertainties,” lays out the exact tyrannical plans that the EU’s critics have been warning about for years. After identifying key areas of uncertainty and concern affecting Europe — from spreading [false flag] terrorism to [manipulated] cultural tensions to [engineered] economic hardships — the document proposes three new areas for expanded EU cooperation:

Even more stunningly, the paper actually proposes a standing EU-directed military chain of command, up to and including standing European armed forces:

“The EU will need to take action more often in order to manage crises that directly affect its own security. We therefore need stronger and more flexible crisis prevention and crisis management capabilities. The EU should be able to plan and conduct civil and military operations more effectively, with the support of a permanent civil-military chain of command. The EU should be able to rely on employable high-readiness forces and provide common financing for its operations. Within the framework of the EU, member states willing to establish permanent structured cooperation in the field of defence or to push ahead to launch operations should be able to do so in a flexible manner. If needed, EU member states should consider establishing standing maritime forces or acquiring EU-owned capabilities in other key areas.”

These goons must hate Mehran Keshe and all he stands for, who explained in overview on Tuesday how, for a few dollars, his plasma technology can be used to disable a fleet of military aircraft – or anything else, for that matter. We live in interesting times…