The Boy with Divine Powers

One of the things that intrigues me is how it is that those of us living in the West, for the most part, do not pull on this thread that dangles into our world from the yogic practices of what we call the East (no Ayahuasca needed, though it can have a place, e.g. the practices of South America).

This video tells a story of a young boy who was meditating continuously for months without food or water. Inevitably, because it is a Western video, it carries all the usual sensationalism. To its credit, however, it includes footage on the studies done on the 80 or so year old Indian man, Prahlad Jani, who appears to have not taken food or fluid for 70 years. Western science does not acknowledge the existence of what is known as the pranic tube, which runs along the centre of the body and enables us, if activated, to process prana from the sun.

“It’s impossible!!!”, says Western “science”. Jani’s story and studies conducted on him on around 2010 briefly made the Western press, but then we all went back to sleep. Certainly not something the mainstream press would keep alive.

Similarly, we hear of the so-called very old, who might struggle to reach perhaps 120 years of age, whilst there is a man known as Sri Mahavatar Babaji – or just simply Babaji – who lives in the Himalayas and is, by my calculations, over 2570 years old. Seen him mentioned recently for his extreme old age, have you? Ohhh… and he looks to be about 30.

And then there’s the entire, complex yet simple subject of the Kundalini energy which lives, you might say, coiled and asleep at the base of the spine, which most people get their only glimpse of during orgasm and which has a spiralling path around the spine that it travels up when activated. This despite the fact that the common symbol for a medical doctor (and used with nurses, also) is the Caduceus:

which reflects those twin Kundalini serpents spiralling up the spine, because these energies have been used since time immemorial in the process of energetic healing…

And yet there is a wonderful book written by the first yogi to come to the US in the ‘20’s, Yogananda, simply called Autobiography of a Yogi, first published in 1946 and which speaks of all of these phenomena, including Babaji, and much more.

But unless we look, all of this is hidden from our Western gaze, as we are persuaded that the value we might garner exists outside of us, in money and possessions, all whilst fear, anger and warmongering towards our fellow man is engendered, or we are persuaded that whichever brand of religion we are associated with has the only path to God…

Perhaps, just perhaps, we might be awakening from this very long slumber – a slumber that has been carefully fostered by those whose interests it serves.

If you haven’t read Yogananda’s book, I recommend it. It is hard to hold onto your current Western perception of life after reading it. And his sensitive, expressive use of the English language is all the more remarkable for it being his second language.

This documentary, originally aired in 2007, follows “Buddha Boy” who lived on prana for 10 months.  “He wanted God, Himself, to be his guru.”

The documentary resulted in skepticism, disbelief, and suspicion, yet this is something we did, and will have the ability to do once again.

Is it possible for humans to not eat or consume water for longer than 3 or 4 days? What used to be scientifically impossible is now under great question as a teenage boy in South-Central Nepal meditated for 10 months and did not consume food or water during the entire time. This story is receiving more attention these days as the world continues to open up to new possibilities.

Ram Bahadur Bomjon, also known as “Buddha Boy” decided one day to go to a tree in Nepal and begin meditating for what he initially said would be 6 years. His actions quickly became a huge news story as he received attention from thousands of visitors. The media also had a field day with his story as he attracted journalists and film makers from all over the world. One of the most notable pieces of attention came when a Discovery Channel film crew traveled to Nepal to determine if it was possible for a human to abstain from all forms of sustenance. 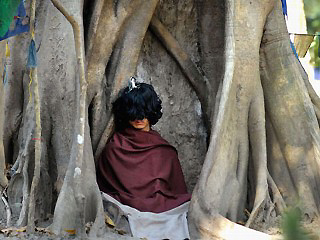 Going into the film, the general understanding was that a human could live for several weeks without food simply by living off of fat and protein stores within the body. The troubling thing when it came to studying Buddha Boy was that the average human can only last about 3 or 4 days without water; he was being observed for longer than 4 days and was showing no signs of dehydration.

To determine whether or not it was an elaborate hoax, the film crew set up cameras for 96 straight hours where they observed his every move -or lack there of. Their observations determined there were no hidden water pipes or food sources. What they were witnessing through their extensive filming was what some would call a scientific impossibility.

As previously mentioned, the film footage revealed that Ram showed no signs of dehydration or physical deterioration during his meditation. Even though he sat in the same position for all of this time, his organs and body appeared to be functioning normally. Of course not every detail could be determined as Ram chose to stay in a meditative state the entire time. This meant no one could go and medically study his well being.

Ram’s meditation lasted 10 months before he suddenly disappeared. While some had believed he was kidnapped, it was later determined he decided to leave the hype behind and go deeper into the Nepal jungle to continue meditation. He felt there was “no peace” while remaining in an area that had become a tourist attraction in Nepal. He since has appeared on occasion to give speeches and interact with those interested in his story and blessings. Each time, he disappears once again to continue his meditation. Although many believe that Ram is the reincarnation of Buddha, he had denied the fact and simply claims to be enlightened like Buddha through his meditation.

This is not the first time a person has claimed to have not eaten or drank anything for very long periods of time. An Indian man claimed he had not eaten or drank anything for 70 years. He agreed to go under strict observation in a medical hospital where he did not consume food or water for 15 days. In this case, the man claimed to be receiving his sustenance through meditation.

A slightly different but similar story can also be seen when looking at an Indian man by the name of HRM who was observed in a medical hospital under strict observation for 411 days. During this time he did not consume any food but he did drink boiled water. He claimed to be feeding off of sunlight which he received while gazing at the sun during periods of zero UV ray emission. In both cases, medical professionals and researchers were baffled by the results and were left with no explanation. While many were quick to pass it off as a hoax and impossible, there has been nothing to back up their denial.

What is interesting about those claiming to not require sustenance while receiving it from some “other” source is that it appears to be much more of a western mentality to violently deny the possibility. In Buddhist tradition, it is seen and understood as something that is entirely possible and many Lama have done this in the past. Is it possible that out denial of such claims and inability to accept the possibility comes as a result of western culture being heavily disconnected from spiritual understandings of ourselves? For me, it seems highly plausible that a lack of self-understanding in western culture creates the inability to look at these claims seriously. Instead of seeing something that is potentially very exciting for humanity, it is viewed as a silly hoax so we can go on with our lives.

The Discovery Channel film crew produced a documentary from the footage they collected and that film can be viewed below. If this story intrigues you, It is highly recommended that you watch the short film as it goes into some very interesting detail and will likely answer some questions you might have. The film is titled “The Boy With Divine Powers”
Sources: