In recent weeks, Fiona Barnett has revealed the names of some of the living politicians and others who abused her as a child, both on Facebook and Twitter. Her Facebook accounts are Fiona Barnett and Pedophilesdownunder. Her website is Pedophiles Down Under.

Here are copies of some of her tweets: 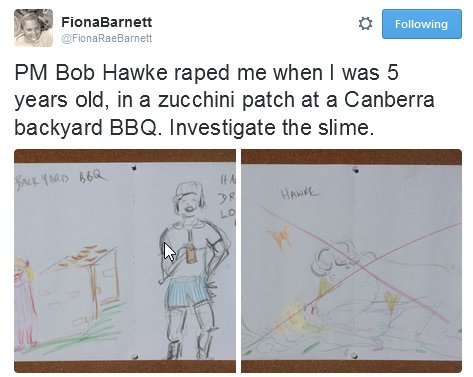 I cannot and do not vouch for these experiences, but I can say they are consistent with information that Fiona has provided to me in the past.

As Fiona says in this recent Richie Allen interview, she got to the point where she felt she had nothing to lose by revealing what she knew and had experienced, almost daring those still living to sue her for defamation; but in revealing this information, there is nothing they can pursue her to try and keep hidden. It was also a statement of solidarity for other victims.

And since she came forth, she has had many others contact her about their experiences, though few willing to go public.

And she explains how the terms of reference of the Australian Royal Commission into child abuse are set up to target religious and other groups, but completely protect politicians past and present and any governmental bodies.

I’ve explained previously how this game of “terms of reference” is played. The public is completely naïve in this matter, and it goes on all the time across the globe.

Also in this interview, Fiona touches on the hidden world of child trafficking and the desire of these satanists to experience the “high” from drinking the adrenalin-filled blood of frightened children. And she gets as close as anyone to recognizing this powerful control system in our world based on this abuse.

Take a few minutes and listen to this interview and assess for yourself the veracity of what she has to say and begin to understand what someone like Fiona has to live with every day as they are targeted by those who run our world. Also, you will get a sense of the power of this woman, as she heals from her abuse and begins to more actively confront her abusers, as well as counsel other victims who the system does nothing to heal or protect.

More power to her arm.

And so, did Nicole Kidman’s father, Tony Kidman, commit suicide in a Singapore hotel as a result of a complaint against him by Fiona that was beginning to be investigated? It is my opinion that he did.