Is our Sun falling silent?

Well, well, well. The good old Beeb Beeb Ceeb has reported the solar shutdown. Not only that, it mentioned the Maunder Minimum. Don’t they know it’s politically incorrect to mention EITHER of these things?

The drop off in activity is happening surprisingly quickly, and scientists are now watching closely to see if it will continue to plummet.

“It could mean a very, very inactive star, it would feel like the Sun is asleep… a very dormant ball of gas at the centre of our Solar System,” explains Dr Green.

This, though, would certainly not be the first time this has happened.

During the latter half of the 17th Century, the Sun went through an extremely quiet phase – a period called the Maunder Minimum.

Historical records reveal that sunspots virtually disappeared during this time.

Dr Green says: “There is a very strong hint that the Sun is acting in the same way now as it did in the run-up to the Maunder Minimum.”

Mike Lockwood, professor of space environment physics, from the University of Reading, thinks there is a significant chance that the Sun could become increasingly quiet.

An analysis of ice-cores, which hold a long-term record of solar activity, suggests the decline in activity is the fastest that has been seen in 10,000 years. 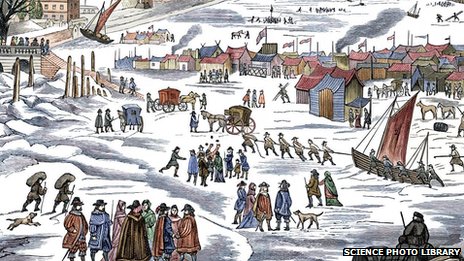 Londoners enjoyed frost fairs on the Thames in the 17th Century

The era of solar inactivity in the 17th Century coincided with a period of bitterly cold winters in Europe.

Londoners enjoyed frost fairs on the Thames after it froze over, snow cover across the continent increased, the Baltic Sea iced over – the conditions were so harsh, some describe it as a mini-Ice Age.

And Prof Lockwood believes that this regional effect could have been in part driven by the dearth of activity on the Sun, and may happen again if our star continues to wane.