Should we re-cork the champagne – Update

This Zero Hedge article is worth reading.

Oh & look how Greece were led to the slaughter & by whom..

The ECB’s response: “the European Central Bank said it can’t release files showing how Greece may have used derivatives to hide its borrowings because disclosure could still inflame the crisis threatening the future of the single currency.”

Considering the crisis of the (not so) single currency is very much “inflamed” right now as it is about to be proven it was never “irreversible”, perhaps it is time for at least one aspiring, true journalist, unafraid of disturbing the status quo of wealthy oligarchs and central planners, to at least bring some closure to the Greek people as they are swept out of the Eurozone which has so greatly benefited the very same Goldman Sachs whose former lackey is currently deciding the immediate fate of over €100 billion in Greek savings.

Because something tells us the reason why Mario Draghi personally blocked Bloomberg’s FOIA into the circumstances surrounding Goldman’s structuring, and hiding, of Greek debt that allowed not only Goldman to receive a substantial fee on the transaction, but permitted Greece to enter the Eurozone when it should never have been allowed there in the first place, is that the person who oversaw and personally endorsed the perpetuation of the Greek lie is none other than Goldman’s Vice Chairman and Managing Director at Goldman Sachs International from 2002 to 2005. The man who is also now in charge of the ECB. 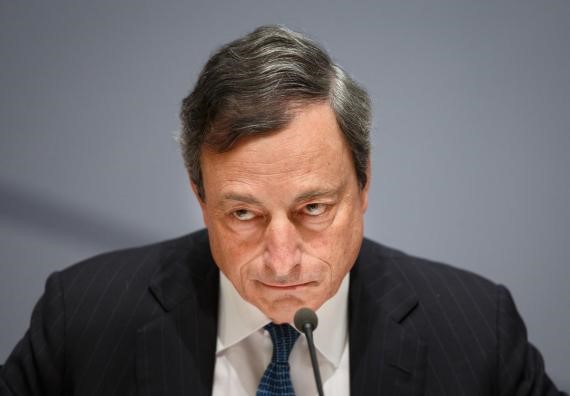 I reckon The Irish Savant has spotted where the Greek game is heading. I quote:

For quite a while now I’ve been chortling at the prospect of the EU and the USA unravelling due to economic mismanagement, most notably the creation of debt so enormous that vast amounts of it never will be repaid.  The mathematics make this abundantly clear. Greece provides an obvious example but the real fun lies in areas such as the international derivatives time bomb and Social Security in the USA. Such an unravelling – my thinking goes – would lead to the Great Reset, involving the destruction of the globalist financial elite (the progenitors of the collapse) and their dastardly plans.

But I have this nagging feeling of late. You see, I don’t subscribe for one minute to the common charge that the ‘elites’ are fools to have landed us in this mess. Venal unprincipled nation-wreckers undoubtedly, but not stupid. Now only a very stupid person could believe for example that the Greek debt could be repaid. And the same goes for the debts of Italy, Spain and Portugal, which, if we’re to believe the narrative parroted by the elite’s whores in the media, would fall like dominoes after a Greek default. And this in turn – we’re told – could lead to the destruction of the EU itself. As indeed it could. The marvellous EU which supposedly has kept the peace in Europe for over fifty years.

But you cry, why would the globalist elites allow the collapse and discrediting of a central component of the one-world/NWO project? Well this is where our old friend the Hegelian Dialectic might come in. Sometimes known as Diocletian’s problem/reaction/solution, the  9/11 attacks represent a textbook example.

Problem: ‘Terrorists’ are attacking us

Reaction: Please protect us from the terrorists

Solution: Well as it so happens we have this wonderful set of repressive laws all drawn up which we can implement now if you want and we’ll save you from the terr’sts..

Every false flag event therefore axiomatically represents the Hegelian Dialectic. In this instance a widespread economic collapse would represent the Problem, while the Reaction (if the situation got bad enough, and I think it will) will be to beg someone – anyone – to help us out of our misery. And for the Solution the elites can present the False Dialectic: That it was not the centralised inter-dependency of the Euro countries that caused the problem, rather that they were not centralised enough.

Not as crazy as it seems. In fact there’s clear evidence of the False Dialectic already being rolled out. Have we not seen frequent references to the fact – and it is a fact –  that the Eurozone project was doomed ab initio because a financial union without an underlying political union was bound to fail? Now imagine the power of the mass media, the ‘independent’ think tanks and a united front of corrupt politicians all rowing in to spread this message to an impoverished and desperate post-collapse public. ‘Just give us more centralised political control and we’ll solve your problems’. We saw how easily it can be done with the Patriot Act in America.

Adding grist to the mill is the active collusion of our rulers in the disintegration of border controls, the degradation of every aspect of society and the ever-increasing level of welfare-dependency. It’s Cloward-Piven redux.  There’s no other rational explanation. And as final and conclusive proof I offer this picture of Mario Draghi. Is he not the earthly embodiment of Lucifer?