Who Turned Out the Lights?

This article gets the current state of play:

What’s with this anything goes atmosphere we’ve been swept into when it comes to governmental, economic and societal behavior?

What happened? How did this darkened, backwards world become the “new normal” everyone seems to have accepted, with nary a whimper of complaint? Where did this come from, and in what world are we now living?

It’s very much like being in a well-lit room when someone waltzes in and hits the dimmer, which before you know it has been gradually turned down to almost zero visibility.

And apparently the tables were turned when the lights went out.

Governments do as they please without regard for due process of law or public opinion, never mind the consequences; bankers run roughshod over nations and populations with abject impunity, extorting everything they can get and then insist they get bailed out – and are; Wall Street and corporations openly cheat, steal and manipulate with complete abandon and in plain sight with zero accountability.

There are no consequences for wrongdoings, no serious protests, logical investigations or punishment – no nothing. All while the whirled around us unravels before our eyes.

Now add to this dystopian nightmare militarized police and swat teams indiscriminately murdering innocent civilians without consequence; the environment getting trashed by geoengineering and radiation while the media and authorities won’t even acknowledge it is happening; and all the while psychopathic fascist war mongers murder millions in their march to conquer the world under the Orwellian banner of democracy and freedom supposedly against their own completely fabricated, amorphous threat of terrorism.

I know you’ve heard all this before but let’s get some context – the makeover of our planet is absolutely shocking when you stand back and see it for what it is.

They Operate in the Shadows

When the lights are out, elements operate “under the cover of darkness.” Ring a bell? Who works under those conditions? The word that comes to mind is “stealth”.

The screws are being tightened, and most people think that’s just how things are.

The rest of the article is here.

No one embodies truth in art like David Dees 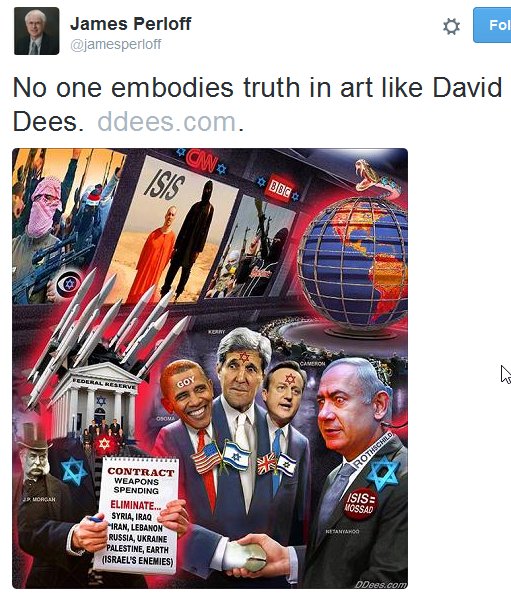 Former French Foreign Minister Roland Dumas referred in a book he published entitled “Coups et blessures” (Assaults and Injuries), that “The “Israelis” are doing whatever they want in France, and are controlling the French Intelligence with what serves them”.

Former French Foreign Minister Roland Dumas referred in a book he published entitled “Coups et blessures” (Assaults and Injuries), that “The “Israelis” are doing whatever they want in France, and are controlling the French Intelligence with what serves them”.

On another hand, Dumas confirmed that the “Israelis” are mistaken not to negotiate with Syrian President Bashar al-Assad, even if the latter refuses any kind of agreement. He also added, “I made some special relations with him [Bashar al-Assad] like those I had with his father (President Hafez Assad)”.

Furthermore, Dumas revealed in the same book that when current Zionist President, Shimon Perez was still the entity’s Foreign Minister, he advised Dumas to pay President Hafez Assad a visit in 1992. At that time Perez was aware that the US is seeking a new way to understanding with Damascus, so he [Perez] believed that France could also gain interest through being involved in the Middle East peace process.

In this context, Former French Minister added, “The deceased Syrian President had little faith in Perez, and he knew the mazes of the internal “Israeli” relations”. Hafez al-Assad was aware that the “Israeli” Foreign Minister might adopt unilateral initiatives, and therefore it won’t lead into anything effective”.

In his “Coups et blessures”, Dumas also mentioned the Islamic Republic of Iran, which he had visited several times and met its former Foreign Minister Ali Akbar Wilayati, and former President Hachemi Rafsanjani. Dumas strictly affirmed, “The Iranian atomic bomb is in my view similar to the weapons of mass destruction possessed by former Iraqi President Sadam Hussein, i.e. I don’t believe in all of that. I believe that all what occurred was a misleading of facts”. He also referred to that, “The confusion in the French policies goes back to known interferences, where “Israel’s” close presence makes all analysis suspicious”.

On the same level, Dumas defended the Iranian point of view regarding the need to possess nuclear energy reactors, where its oil reserve might not last for more than 60 years. He confirmed that Iranian seek their civil nuclear program at the time when all reports refer to the non-existence of any nuclear weapons. In the context of his book, Roland Dumas clarified that former French Foreign Minister François Mitterrand had close relations with the “Israelis”, even if he wasn’t open about it.

On another level, he confirmed that the “Americans did indeed plan to kill Libyan President Muammar Gaddafi through raiding him with planes in the 1986, referring to that France did not allow them to exploit its airspace for that. Gaddafi had thanked France for delaying the arrival of the US drones for more than 15 hours because of the French refusal, which gave Gaddafi time to leave the target place”.

Roland Dumas affirmed that the negotiations between “Israeli” Prime Minister Benjamin Netanyahu and PA President Mahmoud Abbass, will not lead to anything. He reiterated that the Palestinian-“Israeli” conflict is unsolvable, where US President Barak Obama stepped back from his pressures and warnings to “Israel” due to the Jewish Lobby pressure surrounding the US President”.

Dumas indicated, “Any president or Western official to approach the Palestinian-“Israeli” conflict will collide into the settlers, and that is why they would reach the drastic end where “The solution is found in the absence of any solution”.

Roland Dumas also criticized French President Nicolas Sarkuzy’s decision to include France in the united leadership of the NATO, believing that Sarkuzy made a big mistake in France’s traditional position set by Charles de Gaulle.

It is quite a while since the French Revolution, but if you look closely at it, you find the key figures in the Revolution that overthrew the French monarchy were Freemasons, and by then the Illuminati had effectively grabbed control of Freemasonry. In other words, the French Revolution was the first Illuminati/Rothschild takeover of a country, a pattern they have rolled out in differing forms, fashioned to the requirements, across the globe. So, France has been their play toy since the 1790s and this powerful influence over France by Israel we see today is simply the consequence.

There is a pattern of secret societies of the Light being overtaken by the dark throughout human history, and is a model we saw first in Atlantis, with the priest class being overtaken, followed by a similar pattern in ancient Egypt and down through time. Freemasonry is but a modern example of an old pattern. Are we reaching the end of that pattern? Do we live in that time? Certainly our ancestors were hell bent on telling us about this time we are in, even back to Göbekli Tepe at least 12,000 years ago, when we are once more in an alignment with galactic centre, as dictated by the precession of the equinoxes. And did they bury it, for us to discover it in this time, just as the Long Count Mayan Calendar also pointed to this time, because it marked this time of change?

May it be so. If not, the prognosis for humanity is not good.

France’s state of emergency allow for anyone’s house to be searched, people to be put under house arrest without trial and any website to be blocked

For at least 3 months, we have a police state in France. I quote:

Police in France have been given huge new powers including the ability to put people under house arrest without trial and to block websites.

France’s parliament has extended the country’s state of emergency for three months, allowing authorities to get access to huge powers that date back to 1955.

The state of emergency was declared on Saturday, just after attacks that left 129 people dead.

Such a decision gives the police powers including the ability to keep people in their homes without trial, searching the homes of people without a warrant from a judge, and the power to block any website that is deemed a problem.

Any one notice it conveniently blankets the COP21 climate change conference? This where the global elite seek to lock everyone into carbon reduction targets, as step down the Agenda 21 path.

Just in case you missed it.

It also brings France into the attempted ousting of Assad – sorry – war on ISIS. You can’t fail to notice the difference in outcomes between the supposed attacks on ISIS by the United States, under whose “attacks” they flourished, whereas the Russian efforts are a very different story. Remember, Syria is about the size of a medium sized US state. It’s easy to lose perspective.

We have seen lots of sabre rattling over encryption. Probably not the event that will see this seriously attacked, but it’s close. I give it another 3 months at most before there’s another attack where they demonstrate encrypted conversations were used to set up the event and ban software such as the reference point software for secure text messaging and phone calling called Signal. This time they missed because there was no evidence of the use of encryption. But it will come.

Meanwhile this movie theatre we are in that we take to be real moves onto the next feature they have planned for us.

This is a fantastic discussion between three great, open, questioning, informed minds. I haven’t finished watching this 3 hour interview, but better to share it with you so you can connect with it. It covers much of the context for Graham’s exciting new book “Magicians of the Gods: The Forgotten Wisdom of Earth’s Lost Civilization”, which I’m currently reading. More on this when I’m done.