Thank you, Graham, for sharing this wonderful experience: 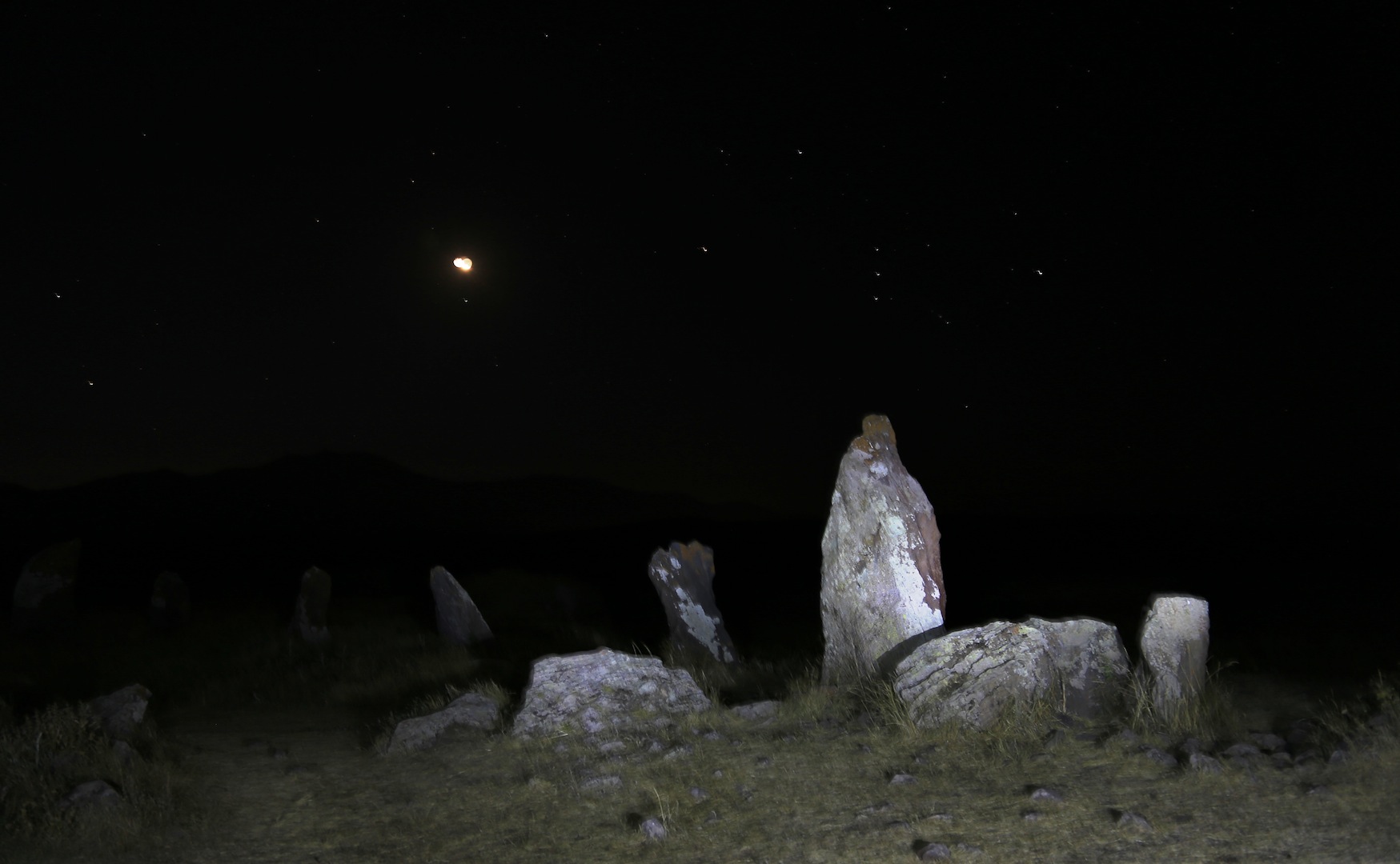 Photo of the rising of Orion over Karahunj, 11 August 2015, by Leszek Wesolowski, Time of a New Era.

The attached photograph shows the constellation of Orion rising before dawn over the megaliths of Karahunj, Armenia. The three stars of Orion’s belt can be seen standing almost vertical in the sky above the tip of the menhir just to the right of center in the photograph. Apologies if the reproduction viewed on small devices may be faint but this was a difficult night shot.

In recent years, in response to requests from many readers to accompany me on research trips, I have been experimenting with hosting groups of travellers on journeys to countries of interest for my work. I try to do this a couple of times a year. So far I am very happy with the way these adventures have turned out and the great people who have chosen to travel with me. Armenia is the latest trip and I have spent the past ten days on the road here with a wonderful, open-minded, enquiring group of people exploring the many mysteries of this beautiful and ancient land.

We gathered at Karahunj at 4 am to observe Orion rising close to due east over the ring of jagged mountains surrounding this incredible megalithic site that was established as a stellar observatory more than 7,000 years ago. What made it all the more special was that we were present amongst the megaliths on the night of 10/11 August which marks the beginning of Navasard, the ancient Armenian New Year – no longer officially celebrated as such but, despite censure from the Christian Church, still honored and respected by many in this wonderful country.

Our group is an international one consisting of citizens of the United States, Russia, Australia, Italy, Germany, India, Malaysia, the UK, South Africa, Holland and Armenia and we mingled amidst the stones, beneath the luminous sky, with many Armenians who had made their own pilgrimages to Karahunj from local towns and villages.

The rising of Orion at the ancient New Year is an event of great significance here since this majestic constellation is regarded as the celestial figure of Hayk the legendary hero of Armenia – just as, in ancient Egypt, Orion was viewed as the celestial figure of the god-king Osiris. It was a moment of profound and numinous beauty as the three belt stars came into view over the mountains in alignment with the weathered megaliths, and the constellation began its slow ascent towards the meridian accompanied by a crescent moon a little to the north. After an hour the sun followed, filling the sky with its light and the stars vanished but we all knew we had shared the experience of a very special union of sky and ground, macrocosm and microcosm, human consciousness and the universe that gave us birth and sustains us.

We danced and sang with our Armenian hosts and wished each other a happy New Year. The hope that we were all present to express and to manifest was for peace in this troubled world — so fraught with unnecessary pain and difficulty, so disordered and awry with deliberately manipulated hatred, fear and suspicion. No matter how deviously our politicians, religious authorities and corporate money-men seek to mislead us and divide us from one another, the possibility nonetheless exists for a new spirit of forgiveness, love, trust and tolerance to dawn in which humankind can move forward to create a brighter future in harmony with one another and the universe, and nurturing to spirit.

So much has been done to destroy man’s knowledge of and connection with the cosmic forces, patterns and energies that play such an important part in our lives. Graham’s story of how the Christian church sought to stamp out the Armenian new year, acknowledging a celestial pattern that has been important to them for thousands of years is but one of hundreds if not thousands of examples. Indeed, historical sites are full of these connections and understandings. Why were they so important to our ancestors and why are they being systematically hidden and destroyed?