This article from The Intercept tells the story of the victimisation and horrific incarceration in N.Y. of a young Somalian man who grew up in Britain. He refused the overtures of Britain’s MI5 to being an informant, and paid a horrific price:

Mahdi Hashi, a young man of Somali origin who grew up in London, had never been to the United States before he was imprisoned in the 10-South wing of the Metropolitan Correctional Center in lower Manhattan in November 2012, when he was 23. For over three years, he has been confined to a small cell 23 hours a day without natural light, with an hour alone in a slightly larger indoor cage. He has had no physical contact with anyone. Apart from occasional visits by his lawyer, his human interaction has been limited to brief, transactional exchanges with guards and a monthly 30-minute phone call with his family.

Yet most of Hashi’s time in solitary confinement occurred before he had been deemed guilty by the justice system. Prolonged isolation prior to or in the absence of trial, sensory deprivation, and a lack of independent monitoring are normally associated with the detention center at Guantánamo Bay and CIA black sites overseas. But the MCC’s 10-South wing, which houses terrorism suspects, is no different in these respects. A former MCC prisoner and a psychologist specializing in trauma told The Intercept that the kind of extreme isolation imposed on defendants there can pressure them to accept a guilty plea, irrespective of actual guilt.

For Hashi, who worked at a community youth organization in London, everything changed when he was approached by MI5, the U.K.’s domestic intelligence agency. He was pressured to become an informant, according to accounts he gave to rights groups and local authorities, but refused, despite being warned that doing so would make his life difficult. 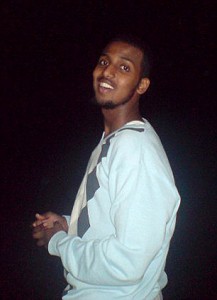 In 2012, while Hashi was visiting Somalia, the British government used special powers to strip him of his citizenship, leaving him stateless. He crossed into neighboring Djibouti to visit the British consulate there, he claims, and appeal the decision. U.S. prosecutors allege he was traveling to Yemen to join al Qaeda.

Upon entering Djibouti, Hashi was arrested by agents of the secret police and forced to watch other prisoners gagged, blindfolded, and beaten for hours, he alleges in case filings, with the complicity of FBI agents and other unidentified Americans. According to defense attorneys, Hashi was threatened with physical abuse and rape if he did not cooperate.

In November 2012, he was transported to New York by the U.S. government to face charges of supporting al Shabaab, the Somali terrorist organization. Prosecutors say he traveled to Somalia to attend a training camp and fight with al Shabaab in Somalia’s civil war. They accept that Hashi poses no specific threat to any Americans and that he received “harsh treatment” in Djibouti.

In May 2015, after two-and-a-half years of isolation, Hashi entered a guilty plea of conspiring to provide material support to al Shabaab. Last week, on January 29, he was sentenced to nine years in prison. He will likely be incarcerated at a Supermax facility in Colorado or a high-security “communications management unit” in Illinois or Indiana, all of which mean ongoing solitary confinement.

Welcome to the world we live in.