The (banking) scam has been known about for centuries

As we contemplate the shenanigans of the Greek ‘rescue’ and the more general bankster-driven destruction of Western societies it’s worth noting that the dangers had been noted from long, long ago. And in the intervening years as well.
“When a government is dependent upon bankers for money, they and not the leaders of the government control the situation, since the hand that gives is above the hand that takes… Money has no motherland; financiers are without patriotism and without decency; their sole object is gain.” Napoleon Bonaparte, 1769-1821
“History records that the money changers have used every form of abuse, intrigue, deceit, and violent means possible to maintain their control over governments by controlling money and its issuance.” – James Madison, 1751-1836
“If the American people ever allow private banks to control the issue of their currency, first by inflation, then by deflation, the banks…will deprive the people of all property until their children wake-up homeless on the continent their fathers conquered.[my emphasis]. Thomas Jefferson,  debate over the Re-charter of the Bank Bill 1809
“I am a most unhappy man. I have unwittingly ruined my country. A great industrial nation is controlled by its system of credit.  The growth of the Nation and all our activities are in the hands of a few men.”    “Some of the biggest men in the U.S., in the field of commerce and manufacturing, are afraid of somebody, are afraid of something. They know that there is a power somewhere so organized, so subtle, so watchful, so interlocked, so complete, so pervasive, that they had better not speak above their breath when they speak in condemnation of it.” – The New Freedom, President Woodrow Wilson,1913 (after signing into passage the Act that established the Federal Reserve System)
“Every effort has been made by the Federal Reserve Board to conceal its power but the truth is the Federal Reserve Board has usurped the government of the United States. It controls everything here and it controls all our foreign relations. It makes and breaks governments at will.”- Rep. Lewis McFadden, (D PA) Chairman of the House Banking and Currency Committee, 1914
“The Federal Reserve Bank of New York is eager to enter into close relationship with the Bank for International Settlements….The conclusion is impossible to escape that the State and Treasury Departments are willing to pool the banking system of Europe and America, setting up a world financial power independent of and above the Government of the United States….The United States under present conditions will be transformed from the most active of manufacturing nations into a consuming and importing nation with a balance of trade against it.”  [my emphasis]- Rep. Louis McFadden  New York Times (June 1930)
“If the banks create ample synthetic money we are prosperous; if not, we starve. When one gets a complete grasp of the picture, the tragic absurdity of our hopeless position is almost incredible, but there it is. It is the most important subject intelligent persons can investigate and reflect upon. It is so important that our present civilization may collapse unless it becomes widely understood and the defects are remedied very soon.” – Robert H. Hemphill, circa 1939, Credit Manager, Federal Reserve Bank in Atlanta
“The process by which banks create money is so simple that the mind is repelled.” John K. Galbraith, 1975
“It is well enough that people of the nation do not understand our banking and monetary system, for if they did, I believe there would be a revolution before tomorrow morning.” – Henry Ford, 1925
The depression was the calculated ‘shearing’ of the public by the World Money powers, triggered by the planned sudden shortage of supply of call money in the New York money market….The One World Government leaders and their ever close bankers have now acquired full control of the money and credit machinery of the U.S. via the creation of the privately owned Federal Reserve Bank.” – “My Exploited Father-in-Law,” Curtis Dall, 1970, son-in-law to FDR
Will Americans act to rebuild our nation, as Germany and Japan have done when they faced the identical conditions which we now face–or will we continue to be enslaved by the Babylonian debt money system which was set up by the Federal Reserve Act in 1913 to complete our total destruction? This is the only question which we have to answer, and we do not have much time left to answer it.” – Secrets of the Federal Reserve, Eustace Mullins, 1991
But not to worry. we have The Committee To Save The World. (Can you imagine the comment had their names been, say, Geraldini, Luchese and Rizzo?) 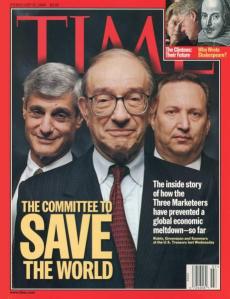