A senior archaeologist at Tel Aviv University has cast doubt on the alleged Jewish heritage of Jerusalem. Israel Finkelstein’s claims have been made in the face of official Israeli and biblical claims to the occupied city.
Professor Finkelstein, who is known as “the father of biblical archaeology”, told the Jerusalem Post that Jewish archaeologists have found no historical or archaeological evidence to back the biblical narrative on the Exodus, the Jews’ wandering in Sinai or Joshua’s conquest of Canaan. On the alleged Temple of Solomon, Finkelstein said that there is no archaeological evidence to prove it really existed.
According to Finkelstein’s university colleague, archaeology lecturer Rafi Greenberg, Israel is supposed to find something if it digs for a period of six weeks. But, Greenberg told the Jerusalem Post, Israelis have been excavating the so-called City of David in the occupied Jerusalem neighbourhood of Silwan for two years to no avail.

These conclusions are consistent with those of Shlomo Sand, who I have mentioned previously.

Don’t let the facts interfere with a good story. We know our Zionist brethren won’t make that mistake. Quite the opposite, actually.

Here was a simple aim at the heart of the top-secret program: Record the website browsing habits of “every visible user on the Internet.”

The mass surveillance operation — code-named KARMA POLICE — was launched by British spies about seven years ago without any public debate or scrutiny. It was just one part of a giant global Internet spying apparatus built by the United Kingdom’s electronic eavesdropping agency, Government Communications Headquarters, or GCHQ.

The revelations about the scope of the British agency’s surveillance are contained in documents obtained by The Intercept from National Security Agency whistleblower Edward Snowden. Previous reports based on the leaked files have exposed how GCHQ taps into Internet cables to monitor communications on a vast scale, but many details about what happens to the data after it has been vacuumed up have remained unclear.

Amid a renewed push from the U.K. government for more surveillance powers, more than two dozen documents being disclosed today by The Intercept reveal for the first time several major strands of GCHQ’s existing electronic eavesdropping capabilities.

The surveillance is underpinned by an opaque legal regime that has authorized GCHQ to sift through huge archives of metadata about the private phone calls, emails and Internet browsing logs of Brits, Americans, and any other citizens — all without a court order or judicial warrant.

So, Britain’s GCHQ has been caught at it and we all know some of what the NSA is up to.

In truth, it doesn’t matter who or where you are – unless you’re one of the global elite. You are being profiled and tracked, whether it’s being done legally or illegally. It doesn’t matter to them. They’ll do it, anyway, so you can be profiled, then manipulated and controlled, and perhaps eliminated if you’re too outspoken or seen as a risk to the elite and their plans.

We’ll see more stories like this, from every country. It’s all the same game, and you and I are a pawn in that game.

Will enough people have the courage and the will to disarm them in some manner? I suspect we’ll know soon enough. It’s almost crunch time.

I was reminded of this article by Preston James, yesterday. I consider it to be a fairly accurate if graphically expressed summary of what’s in play and has been for a long, long time. 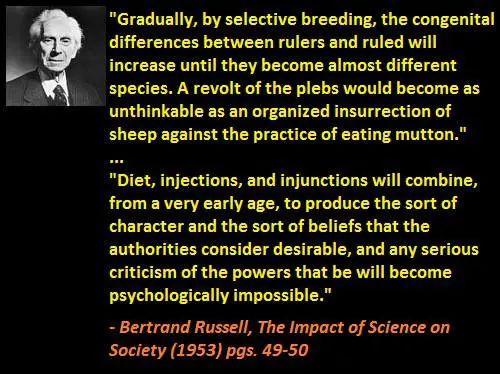 And its rollout in our time is abundantly clear.

Dietary interference is not just about GMOs. It includes persuading us that unsaturated fats and lots of grains are better for us than saturated fats, vegetables, meats (if they are an option for you). They include cultural practices over generations that have us giving our children sweets made from refined sugar that create lifelong addiction to a known poison, and a diet that is chock full of refined carbohydrates, generating the global epidemic of Type II diabetes. All planned. And add to this poisonous and addictive modern wheat, whose change pre-dates GMO and hence slips through that net.

And then there’s vaccination… Do you still think it’s for herd protection purposes? There’s no evidence to support that idea. Actually, the dead opposite due to the viral shedding from those vaccinated. But the doctor and the government says it’s good for me and my children…

And these two are, perhaps, two of a thousand items where the elite are destroying the lives and livelihood of the general public.

Bertrand Russell warned us in 1953.