Just read this report from the Washington Post on global warning. It’s bad.  Seems the polar ice caps are shrinking and will be gone within a decade, as will polar bears, and…….actually, just read this summary for yourself.:

“The Arctic Ocean is warming up, icebergs are growing scarcer and in some places the seals are finding the water too hot, according to a report to the Commerce Department yesterday from Consulate, at Bergen , Norway.  Reports from fishermen, seal hunters and explorers all point to a radical change in climate conditions and hitherto unheard-of temperatures in the Arctic zone.  Exploration expeditions report that scarcely any ice has been met as far north as 81 degrees 29 minutes.

Soundings to a depth of 3,100 meters showed the gulf stream still very warm.   Great masses of ice have been replaced by moraines of earth and stones, while at many points well known glaciers have entirely disappeared. Very few seals and no white fish are found in the eastern Arctic, while vast shoals of herring and smelts which have never before ventured so far north, are being encountered in the old seal fishing grounds.  Within a few years it is predicted that due to the ice melt the sea will rise and make most coastal cities uninhabitable.”

Er, did I mention that the report dates from November 2, 1922?
Yes, nearly 100 years ago they were making the very same apocalypse-around-the-corner predictions that they’re peddling today. The Climate Change Project is a scam from start to finish. Great money stands to be made by corporations in on the racket, universities and think-tanks churning out bogus research, and by an army of crooks in the Third World.
But there are darker (!) forces driving this agenda, which is a classical representation of the Hegelian Dialectic. Problem: We’re all doomed! (thanks Al). Reaction: Please Government, UN – anyone – help us to avoid this fate. Solution: Well good news people. We have all ready to go a series of measures that will eliminate the risk. But, em, this will require a vast transfer of funds from White wage slaves to the Third World and the trans-national bodies engaged in the project. And more important it requires many significant powers to be devolved from nation states to these same trans-national institutions.
Perfect.
Doesn’t everything click into place once you’ve taken the red pill? 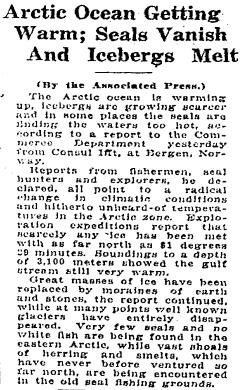 Modern Educayshun delves into the potential dangers of our increasingly reactionary culture bred by social media and political correctness.

Yes, it’s a spoof, but it shares some frightening realities that are becoming mainstream. Realities that were very much on show in the words and behaviours on display after, for example, the Sandy Hook false flag event.

Dr. Judith Curry is Professor and former Chair of the School of Earth and Atmospheric Sciences at the Georgia Institute of Technology. Following is her verbal remarks as delivered to last week’s US Senate Commerce Committee Hearing on “Data or Dogma? Promoting Open Inquiry in the Debate Over the Magnitude of the Human Impact on Earth’s Climate.”

Curry points out how the mechanisms that are misleading the world on anthropogenic global warming work through science, though she does not understand why it has been done or how the IPCC has been structured by its terms of reference to ignore everything accept human factors. Nevertheless, her testimony illustrates how the world of climate science has been hijacked.

A brief video exposing the miraculous recovery of two crisis actors used in recent false flag events, one of whom has received donations of over $800K since the event.

Sounds like a good line of business to be in.