It is hard to live the American Dream when the deck is stacked against you.  Our politicians stood idly by as millions of good paying jobs were shipped overseas, our economic infrastructure was absolutely gutted and multitudes of small businesses were choked to death by miles of red tape.  Now, we are reaping the consequences.  In America today, nobody has a job in one out of every five families, and there are more than 100 million working age Americans that are currency not working.  And thanks to our transition to a “service economy”, many of those that are actually working are deeply struggling too.  According to the Social Security Administration, 51 percent of all American workers make less than $30,000 a year.  And the Federal Reserve says that 47 percent of all Americans could not pay an unexpected $400 emergency room bill without borrowing the money from somewhere or selling something.  That means that about half the country is flat broke, and things get even more precarious for working families with each passing day.

Of course the plight of working families is not something that is new.  Back in the 1950s and 1960s, wages and salaries earned by workers accounted for around half of all gross domestic income.  But since 1970 there has been a precipitous decline, and during the Obama administration we hit an all-time low.  In other words, the share of the pie being enjoyed by working families just keeps getting smaller and smaller and smaller. 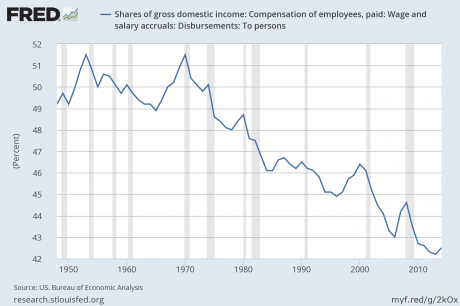 All over the country, median incomes have been falling for years.  This is putting an incredible amount of financial stress on working families, and we have seen poverty grow explosively in the United States during the last couple presidential administrations.  According to one study, median incomes have fallen in over 80 percent of the major metropolitan areas in this nation since the year 2000…

A major new analysis of income in America published by Pew earlier this month found that more than 80% of the country’s 229 metropolitan areas have seen real (inflation-adjusted) incomes fall steadily since the start of this century. Some of the steepest declines in median incomes have been seen in cities hit by industrial decline – for example a 27% drop in Springfield, Ohio and 18% in the conurbation that includes Detroit. But, ominously, even fast expanding success stories have seen incomes falling.

Once upon a time, the middle class was a solid majority in this country.

In fact, 61 percent of all Americans were considered to be middle class back in 1971.

But now, the middle class in the United States is becoming a minority for the first time ever…

“After more than four decades of serving as the nation’s economic majority, the American middle class is now matched in number by those in the economic tiers above and below it,” the Pew report said. “Since 1971, each decade has ended with a smaller share of adults living in middle-income households than at the beginning of the decade, and no single decade stands out as having triggered or hastened the decline in the middle.”

Fewer new businesses were created in the last five years in the US than any period since at least 1980, according to a new analysis (pdf) by the Economic Innovation Group (EIG), a bipartisan advocacy group founded by the Silicon Valley entrepreneur Sean Parker and others. Businesses that did form are also far more concentrated than ever before: just 20 counties accounted for half of the country’s total new businesses. All of them were in large metro areas.

“It’s hard to put into scale the collapse of new business formation. We have no precedent for that rapid and steep of a collapse,” said John Lettieri, co-author of the report and co-founder of EIG, in an interview. “It will have a ripple effect in the economy. You‘re going to feel that impact five, 10, and 15 years in the future.”

Of course just about every other economic indicator shows the dramatic decline of the middle class as well.  As you can see from this set of charts from Zero Hedge, median family income, the labor force participation rate and the rate of homeownership are all way down over the last decade.  Meanwhile, the U.S. national debt, the number of Americans on food stamps and healthcare costs are way up.  Does that sound like a “healthy economy” to you?

All planned long ago and being implemented perfectly.

An insightful reflection on how our world has changed – and why

Whilst this entire article is worth reading given its insights, it is the comment shared at the beginning which is the most striking for me:

‘If you occupied what was considered the ideological / moral centre ground in 1965, and went to sleep for 50 years and woke up in 2015 you’d find yourself occupying the ideological /moral ‘far right’. You didn’t have to budge one inch ideologically to find yourself there.  The whizzing sound you heard was the ideological / cultural centre ground zooming over to the Cultural Marxist hard left.
Everything that was considered mainstream, obvious, common sense, logical and moral in 1965 is now considered by our political, academic and media elite to be bigoted, ignorant, hateful, xenophobic, racist, extremist and some form of moral abnormality.
In other words, within the space of 50 years, morality, right, wrong, evil, good, normal, obvious, extreme, sanity, truth, beneficial, dangerous and the instinct for group preservation, has been inverted and stood upside down on its head.
Never before in the entire course of human history has an entire culture, race and civilisation decided to hand over its lands, social capital, heritage and identities to competing and intruding alien cultures without a fight, and even worse, to evolve an ideology that morally justifies and glorifies it as proof of their moral supremacy.
European man is in a civilisational death dance.’

We can’t have the truth being eloquently expressed to the public.

That will never do.

The Fake 6 Million vs. The Real 29 Million: Jewish Lies, Jewish Crimes And The Collapse Of The Jewish Discourse Paradigm

But this article reaches into another area, and that is how this false shame that has been put upon the goyim to hide the true genocide conducted by Jews and those serving their interests. Actually, Azaziah’s 29 million ignores the Bolshevik and Communist Chinese slaughters, to name but two, nor the Palestinian slaughter.

And as I was reflecting on this, two threads came my way on the work of Christopher Bollyn revealing that the War on Terror was born in an Israeli conference in 1979, attended by GWH Bush. The first is this excellent interview by Richie Allen, which is quite far ranging, and an article by Christopher entitled How Israel Created the Fiend for the War on Terror.

And until you understand the bigger picture, none of this makes sense. But when you do, it all fits together like a hand in a carefully tailored glove.

This Swedish video tells the story. A 1500% increase in the incidence of rape. And much more.

And then this article from Germany the same day.

Those perpetrators and supporters of the Coudenhove-Kalergi plan for Europe must be cheering.