The US Presidential election

I watch the pageantry of the US election year and I watch even those who I know know better (yes, I wrote that…) get engaged by the Clinton vs. Trump debate.

As I’ve said before, it is clear that the International Jewish elite have owned, funded and controlled every US President since at least Woodrow Wilson and I suspect well before (JFK made the mistake of thinking he had power he did not and paid with his life). For example, James Perloff provides evidence that William McKinley was under the control of JP Morgan, a now recognised Rothschild front, in his discussion of the false flag triggered Spanish American war of 1895.

Indeed, there is evidence that democracy as we know it was actually “created” by this International Jewish elite after the demise of Charles I in England at the hands of their agent Oliver Cromwell in 1649 – for the purpose of giving the public the illusion of power, when the real power was always hidden and “entirely within their hands”.

In this context, I found this recent meme entirely appropriate: 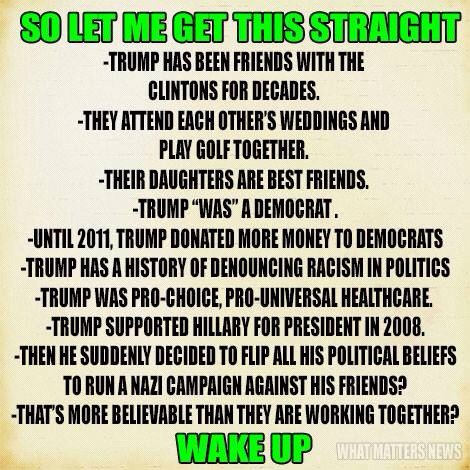 This is not the first person to suggest that Trump and Clinton are really on the same side; which, if you accept the evidence, is implicitly true, even if not so obviously as this laundry list indicates.

And did you really think that Hillary would be prosecuted for her email “negligence”? In my opinion, it was never going to happen. She’s part of the protected and controlled coterie, however sullied she may be in the public’s awareness.

And so, it continues.