I think this is self-explanatory: 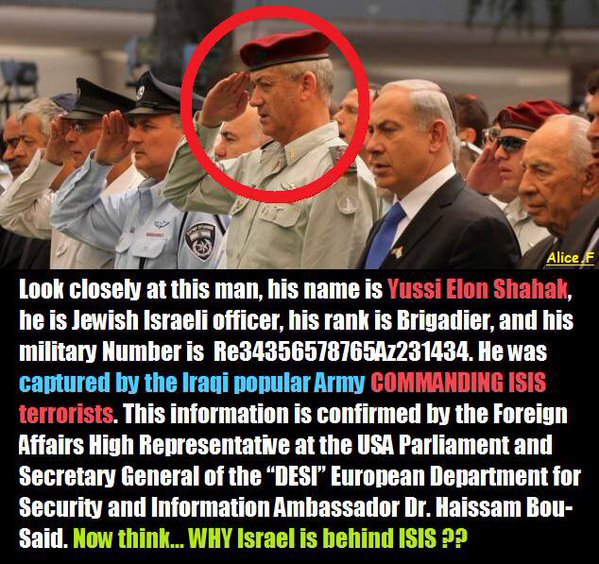 So, let’s not kid ourselves about who is ultimately responsible for creating ISIS, and we can also begin to understand why the United States never had any intention of attacking ISIS, despite their public posturing.

False East/West Paradigm And The End Of Freedom

This excellent article by Brandon Smith reminds us of the games played with us to encourage us to consider Putin the current great saviour. These leaders are all just shadow puppets for us to engage with. As I’ve said elsewhere, if Putin were not doing the bidding of the global Zionist elite, he would be as dead as JFK. They brook no disobedience.

The Zionists have owned Russia since 1917. Do you seriously believe they have given that up? Not a chance.

The synchronicity of events often fascinates me. It was just yesterday that I referred to the child sexual abuse of Fiona Barnett at the hands of high level Australian government and US officials, and later in the day I received a link to an update written by Fiona on her journey towards healing and attempted justice which, of course, is thwarted at every turn.

I encourage you to read this recent article – the first of two – written by Fiona, updating her experiences. They provide a glimpse of the paedo-satanic practices that are used to control the reins of power behind the scenes globally.

Here is a list of all of the articles written by Fiona for Independent Australia.

This control system was brought back into my awareness with the election in Canada of Justin Trudeau as the next Canadian Prime Minister, and I was reminded of the revelations about his father, Pierre Trudeau who, as a former Canadian PM was also party to paedo-satanic practices as revealed in Cathy O’Brien’s book “Trance Formation of America”.

Are we any closer to exposing this control system? Perhaps Fiona’s impending “Candy Girl” documentary might help to shine some light on it, but it is so all-pervasive and has fingers into every area of power and control in our world that it is unlikely to be revealed, short of a shift in consciousness on our beautiful planet. I do, however, wish Fiona every success in her healing and her attempts to reveal her own abuses and the global nature of this abuse and associated control system.

I know from my own attempts on Fiona’s behalf that those inside the system of power and control will not put themselves in any place of risk for such an officially damaged “bag of goods” that Fiona represents to the official system. Unsurprisingly, given her traumatic past, she is not considered “credible” by authorities. This is how the system works.