Even though the abuse involved three Australian Prime Ministers, one whom she names here as Gough Whitlam, the former Governor General, John Kerr, and the former media mogul, Kerry Packer (all now dead), the role of these satanic practices as the global control system for all of those in power, not only politically but religiously, judicially and corporately, remains largely unrecognised. We have the ongoing, simmering revelations in Britain of politicians engaging in these practices, the revelations of Cathy O’Brien in her book “Trance Formation of America” covering the United States and Canada and Fiona’s covering Australia, the dots do not get joined. Similarly, stories of almost identical child hunting and killing parties in Australia as mentioned by Fiona in this interview, again by Cathy O’Brien in the United States and Toos Nijenhuis in Europe and Britain show this satanic practice is global in nature. Toos also exposed these abuse practices reached to the highest levels of the Catholic and Judaic religions.

Will we see this control system exposed in our lifetimes?

Fiona also mentioned that she has shared some of her experiences at Pedophiles Down Under.

The Senate today approved a controversial information-sharing bill that detractors argue is too vague and could put Web users’ personal information in the hands of the FBI and the NSA.

The differences must now be reconciled with a similar House bill in conference before being sent to President Obama, who has indicated he will sign it.

The usual justifications have been rolled to support the implementation of unhindered tracking, monitoring and spying on everyone in the United States. Entirely to be expected. One more step along the path initiated by the inside job known as 9/11 and the subsequent false war on terrorism. It was only ever a matter of time. The police state implementation moves inexorably forward. Meanwhile most people sit glued to their televisions, enthralled by soapies and sport, oblivious to what they are inside of.

And people argue these goons are being disempowered? They must be on a different planet from this one. The next step will be to outlaw private encryption. Again, only a matter of time. Or massive restriction of the Internet. For now, it’s subtle. I was told earlier today that a Google search does not show my blog. Again, no surprise.

And if they feel the next round of tightening needs another false flag event to justify it, then it will happen. It’s called the Hegelian Dialectic. Problem, reaction, solution. Works like a charm.

And meanwhile most commentators stay focussed upon the actions of various nation states and their leaders, oblivious to the real, hidden game behind the public posturing. It was widely acknowledged that the Rothschild family owned perhaps half of all global assets at the end of the 19th century. And it got less how? Certainly, it became less visible.

Carr told us in 1955 that Hitler opposed the globalist bankers 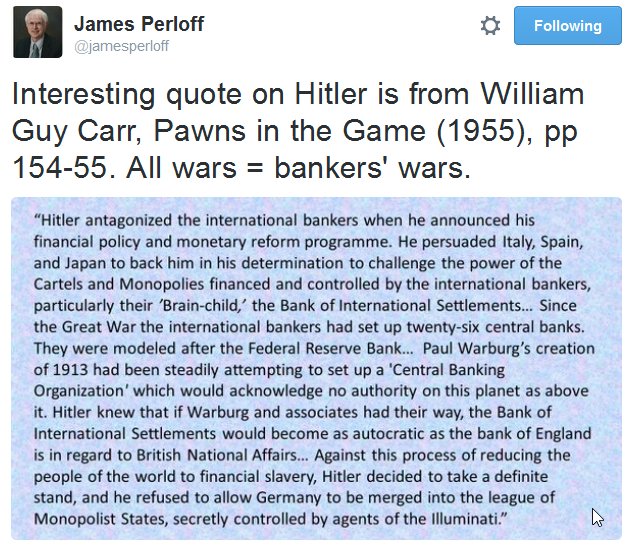 Carr’s book is worth reading. A Canadian naval commander with extensive insider information, Carr spilled the beans on the game behind the game, way back in 1955.

We also easily forget this Zionist led action in 1933:

Remember who fashions our view of history and the world.

One correction from the past. I previously said that Hitler banned usury. Although he flirted with this, in the end he did not.

And this quote, perhaps, captures the true context for WWII in Europe: 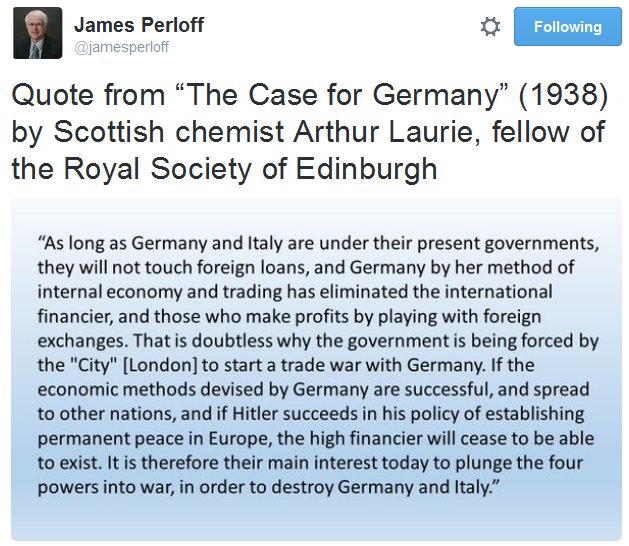 The Rothschild/Zionist control of Britain, United States and Russia well before WWII is not well understood by most. Unless you understand this, you cannot understand WWII.

Of course, it is written out of history. It’s how it’s done. Almost nothing we are taught in history is true.

I was reflecting today on the great fire of London as I was reading about this destruction in Turkmenistan. The outcome of the fire was the building of that state within a state called the City of London, the home of the global financial elite with similar independence to that enjoyed by the Vatican. And that was some happenstance outcome? Spare me. Did you get taught what was really going on here in history classes? Not a chance.

12 Days Before ’08 Crash, Congress was Secretly Told to Sell Off Their Stocks

Earlier this month, it was reported that less than two weeks before the economic collapse of 2008, several members of Congress took their money out of the stock market. Many high ranking government employees were given a heads-up about the impending market crash in secret meetings with the Federal Reserve and the Treasury Department. Then they used that information to engage in insider trading.

It was revealed that Senator Shelley Capito and her husband sold $350,000 worth of Citigroup stock at $83 per share, just one day before the stock dropped to $64 per share. Another shady trader was Congressman Jim Moran, who had his biggest trading day of the year days after the secret meeting, sellings stock in nearly 100 different companies.

These actions would be illegal for any American in any other circumstance, but members of Congress and high-ranking government officials are actually exempt from insider trading laws.

However, Congress watered down the bill and changed key elements that would hold them accountable, allowing them to return to business as usual, and escape any consequences for their prior crimes.