I find it interesting to look out for quotes from our past. What we witness in our own time seeks to present itself as if its disconnected from the understandings and perspectives of the past. 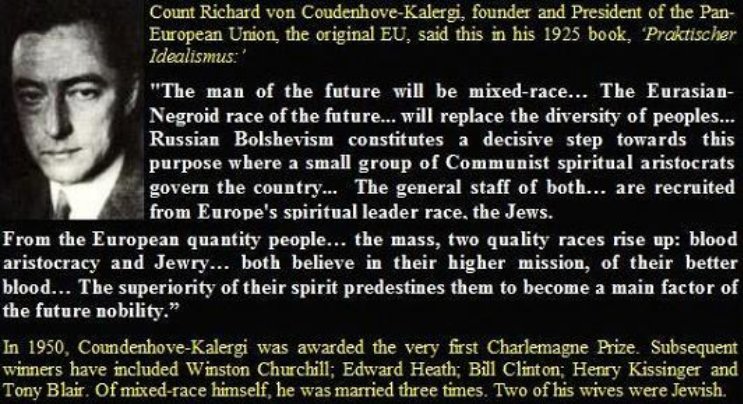 This quote tells us three things:

As I’ve shown elsewhere, the Bolshevik Revolution, despite modern denials, was a Zionist takeover of Russia. Interestingly, it was widely written up as such when it happened, but not today.

The second is that the blending of races we are seeing across the globe today is no accident. The plan was in place in 1925… Today, it looks like the inevitable outcome of a massive refugee problem, a problem that looks like the consequence of seemingly disjointed disputes across the planet, when it’s all been carefully coordinated. But, then, the Zionists are well practised at this. They’ve been shuffling the Jews around the world as puppets in their agenda for centuries. Of course, this doesn’t look like it, either. But look more carefully and it becomes blindingly obvious.

The third thing is the arrogance of the Zionists. But that’s not news.

I quote from this article:

Doubt the near complete control of AIPAC over Congress? Are you aware that former Congresswoman Cynthia McKinney has reported on more than one occasion publicly that newly elected Members of Congress are always approached by AIPAC Representatives and asked to sign their loyalty Oath to place Israel’s security first even before America’s. Technically this of course is complete betrayal to We The people, their constituents and technically Treason.

Understanding how our world really works, yet? Of course, they have plenty of lackeys, many with great power and wealth, willing to do their bidding.

I’m not big on fear, but the future of the world inside this paradigm is truly frightening.

We live in interesting times. This video shows the projections of the goddess Kali on the Empire State Building and what it might mean.

The reason that Darwinism was thrust upon us

I was reading this engaging review of David Livingstone’s Transhumanism: How the Illuminati Depose God by Henry Makow and found an interesting comment at the bottom. Here is part of that comment:

The biggest leg on this “transhumanist chair” that I haven’t seen discussed yet is Darwinism. There’s not enough room here to debate the failings, frauds, or otherwise of Darwinism, but suffice to say that between Piltdown man, Java man, and dozens if not hundreds of other hoaxes and frauds, Darwinism is at best on some very shaky ground. But in transhumanism, we can now finally begin to see the real raison d’etre behind why Darwinism was sold to the public in the first place.

In Darwinism you have a belief structure which claims man began as slime, and over billions of years slowly worked his up, first to pond scum, then to monkeys, and then to a tool-using primate, who — (you have to cue up “Thus Spake Zarathustra” from 2001 Space Odyssey as you’re reading what I’m writing here) — now is able to invent a computer, to program a computer, and now — (music climaxing) — is ready to merge with the computer!! Evolution has been perfected!! Man has become the machine!! All is once again good in the Cosmos!!

In my opinion, Darwinism is nothing more than a fake “theory” that was sold to the public for the purpose of warping the minds of the scientific elite (who, previously, had generally been of a Christian persuasion) to get them to more readily accept and fall in line w/ this transhumanist agenda (which, I think, has been in the works for a very long time).

I have commented before that Darwin himself never believed his theory could explain all life.

But I am drawn to share what the Protocols of the Learned Elders of Zion, specifically Protocol No. 2, has to say:

The goyim are not guided by practical use of unprejudiced historical observation, but by theoretical routine without any critical regard for consequent results. We need not, therefore, take any account of them—let them amuse themselves until the hour strikes, or live on hopes of new forms of enterprising pastime, or on the memories of all they have enjoyed. For them let that play the principal part which we have persuaded them to accept as the dictates of science (theory). It is with this object in view that we are constantly, by means of our press, arousing a blind confidence in these theories. The intellectuals of the goyim will puff themselves up with their knowledge and without any logical verification of them will put into effect all the information available from science, which our agentur specialists have cunningly pieced together for the purpose of educating their minds in the direction we want.

Do not suppose for a moment that these statements are empty words: think carefully of the successes we arranged for Darwinism, Marxism, Nietzsche-ism. (My emphasis) To us Jews, at any rate, it should be plain to see what a disintegrating importance these directives have had upon the minds of the goyim.

It is indispensable for us to take account of the thoughts, characters, tendencies of the nations in order to avoid making slips in the political and in the direction of administrative affairs. The triumph of our system, of which the component parts of the machinery may be variously disposed according to the temperament of the peoples met on our way, will fail of success if the practical application of it be not based upon a summing up of the lessons of the past in the light of the present.

In the hands of the States of today there is a great force that creates the movement of thought in the people, and that is the Press. The part played by the Press is to keep pointing out requirements supposed to be indispensable, to give voice to the complaints of the people, to express and create discontent. It is in the Press that the triumph of freedom of speech finds its incarnation. But the goyim States have not known how to make use of this force; and it has fallen into our hands. Through the Press we have gained the power to influence while remain exist. It proves that Dr. Weizmann knows all about the gold in our hands, notwithstanding that we have had to gather it out of oceans of blood and tears. But it has paid us, though we have sacrificed many of our people. Each victim on our side is worth in the sight of God a thousand goyim.

So, I agree that “Darwinism is nothing more than a fake “theory” that was sold to the public for the purpose of warping the minds of the scientific elite”. Anyone who has any understanding of consciousness knows it is the context for life, not vice versa. It is this fundamental truth that is revealed by the rigorous application of the scientific method to the paranormal by the likes of Rupert Sheldrake and Dean Radin, and why those mired in the scientific worldview cannot bring themselves to seriously consider their work and its implications, believing they can find a way to squeeze it back inside the box called their strictly temporal view of life. Consciousness is the context for their temporal box, not vice versa, and that temporal worldview was created in part for the reasons outlined above. It also contains the model of allopathic medicine, which focusses on treating the symptoms, not locating and healing the true cause.