It’s a question that has long been on my mind. Angela Merkel did not seem to me to be acting in Germany’s interest.

And so, when this article turned up, it made perfect sense:

Confirmation Merkel is Jewish came out of her own mouth when addressing the Israeli parliament the Knesset in Hebrew. In her opening words in German before the speech she thanked the Knesset for allowing her to speak quote “in her mother tongue” which in that speech is not German but Hebrew, the language Jews alone speak to one another.

These are the exact German words which she used to introduce her Hebrew speech: “Ich danke allen dass ich in meiner Muttersprache heute zu Ihnen sprechen darf.” It translates to: “I thank you all that I am allowed today to speak to you in my mother tongue.”

Merkel was born Angela Dorothea Kasner in 1954 in Hamburg, West Germany, the daughter of Horst Kasner (1926–2011), a native of Berlin, and his wife Herlind, born in 1928 in Danzig (now Gdańsk, Poland) as Herlind Jentzsch, a teacher of English and Latin. Her mother was the daughter of the Danzig politician Willi Jentzsch and maternal granddaughter of the city clerk of Elbing (now Elbląg, Poland) Emil Drange.

Herlind Jentzsch was once a member of the Social Democratic Party of Germany and briefly served as a member of the municipal council in Templin following the German reunification. Merkel has Polish ancestry through her paternal grandfather, Ludwig Kasner, a German national of Polish origin from Posen (now Poznań).

The family’s original name Kaźmierczak was Germanized to Kasner in 1930 Kazmierczak is a Jewish surname: http://mail.blockyourid.com/~gbpprorg/j … lement.htm . Kazmierczak derives from Kazimierz, a major Jewish city in Poland, made especially for Jews outside of Cracow. Kazimierz (Latin: Casimiria; Yiddish Kuzmir) is a historical district of Kraków (Poland), best known for being home to a Jewish community from the 14th cent. Kazmierrczak is a name for a Jewish Cantor: http://www.4crests.com/kazmierczak-coat-of-arms.html

This Jewish surname of KAZMIERCZAK was an occupational name for a cantor in a synagogue. The name was derived from the Hebrew CHAZAN, and it also spelt CHASAN, HAZZAN, KHAZAN, CHASINOFF, KHAZONIVCH and CHASINS, to name but a few. Many of the modern family names throughout Europe reflect the profession or occupation of their forbears in the Middle Ages and derive from the position held by their ancestors in the village, noble household or religious community in which they lived and worked.

Anyone reading my posts for any length of time will know that I have cottoned onto a thread that runs through our world and which is largely invisible to most, including many Jews, but which dictates our world and how it has unfolded, at the very least since the French Revolution but there is evidence that it has been steering things for much, much longer. Henry Ford wrote about it in the 1920s before threats to his company’s viability had him pull his head in, and David Duke has also written about it more recently in the same vein – both relying on Jewish evidence for their claims, evidence that is impossible to refute but is possible for you to deny if your beliefs are strong enough, as I have witnessed.

In my experience, some Jews and perhaps others dismiss the above authors as being “anti-Semitic”, a nonsense accusation if you understand it, since most Jews are not Semites and most Semites are not Jews. It’s a wonderful example of weaponised language that serves multiple purposes in our world.

Duke dedicated his book to an Israeli by the name of Israel Shahak:

Israel Shahak, who has died aged 68 from complications caused by diabetes, was for 25 years a highly popular professor of organic chemistry at the Hebrew University of Jerusalem. But during the same period, Shahak, an old-fashioned liberal, was also chairman of the Israeli League for Human and Civil Rights. As such he was accused of being an “Israel hater”, was spat at in the streets, and received constant death threats.

I was interested to understand why Shahak was so hated in Israel and what he had to say. As I read his book Jewish History, Jewish Religion, I begin to understand why. Shahak had the temerity to tell the truth, and he does so by explaining quite a deal of Jewish history and Jewish double entendre as it is applied not only to the goyim but to their own behaviours and Jewish brethren. For me, it makes spellbinding reading because it brings an understanding and an intelligent and informed analysis and explanation as to why our world is the way it is. I will have more to say in the future about Shahak’s book (one of many books by him in this area), but it illustrates just how naïve the Christian world is in regard to, for example, their perception of the Old Testament and Christianity’s relationship to Judaism.

Simply put, Christians read the words of the Old Testament as they are written, whereas most Judaism interprets it through the lens of the Talmud, and this can completely reverse the meaning of what is written. A simple illustration of this misunderstanding is that Christians take the words of the Old Testament to apply to everyone, whereas Judaism takes it to be only referring to their relationship with other Jews, since the goyim simply don’t count in the scheme of things, and are provided in the world to, at best, serve Jews and Judaism, and do not deserve serious consideration when compared with Jews, and can be lied to and manipulated at will to serve the interests of, in particular, the Jewish elite.

And so, when you begin to fully comprehend this, as Shahak lays out, you can begin to understand much more clearly why our world is as it is, and most of us simply apply our principles of fair and equitable behaviour towards our fellow man, not realising that the very fundamentals of Talmudic Judaism are completely at odds with this approach, and this fact is carefully hidden from non-Jews and is actually not understood by many modern Jews.

But when you understand, the behaviours we see in our world – the hidden control of perhaps every country in the world and the way it was done, the execution or attempted execution of those American Presidents who have opposed the creation of a private central bank over the years, the bloodthirsty slaughter of tens of millions of Russians and Chinese using the guise of Communism, the promotion of liberalism, cultural Marxism, transhumanism, the practice of crypto-Judaism, the use of banking and resource ownership to inflict poverty and disenfranchisement upon humanity, the control of the world’s “elite” through satanism – it all fits.

And it is in this context that Angela Merkel is in power as Germany’s Chancellor and is overseeing the implementation of the cultural and social destruction of Germany through the flood of refugees in line with the Coudenhove-Kalergi plan of the 1920s and as now championed by Peter Sutherland, who seems to me to be the classic crypto-Jew.

Sorry for being so politically incorrect…

Ohhh… and let me share this small collage of the Jewish control behind China’s Mao, in case you are one of those who doubt what I’m saying here. 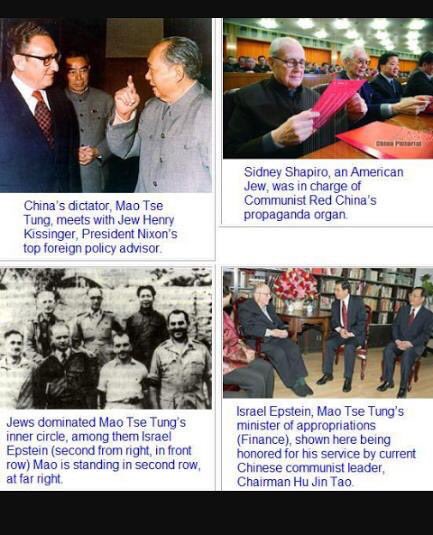 All entirely coincidental, of course.

As I’ve said many times, until we begin to truly grasp this, the world makes no sense. But when you see this, you can understand the daily, heartless slaughter and disenfranchisement of the Palestinians as it was with the Russians and the Chinese, the presentation  of WWII as the friendly, peace-loving Western Allies against that monster Germany when the Jews controlled the US (since at least 1913), Russia (since 1917) and Britain (since the Battle of Waterloo), and the final monstrous lie called The Holocaust to justify the creation of Israel, to generate false guilt and shame amongst the goyim and to send the Jewish “cattle” scampering to Israel as they have driven them elsewhere around the world over the previous centuries for the purposes of the Jewish banking and associated elite, and it explains the enormous funding that flows from the US to Israel every year.

All of the above and so much more fits together when you begin to understand the hidden game.

And if the world doesn’t wake up, the outlook is dire.