Few people understand the power that is held by FEMA in the United States, established under a series of Presidential Executive Orders.

This brief video lays this out.

If you’re in America, I recommend you watch this video, so you know how close you are to martial law and the scope of FEMA’s power.

This story rings true to me:

Last night, I decided to make a late night of it and I decided to listen Alex Jones as he covered the Julian Assange Clinton revelations via live stream precisely at midnight (Pacific). It quickly became 1AM and then I was interrupted with a communication from an insider source. He said very abruptly, “Are you waiting the revelation that will never be?”  I promptly asked him what he knew and he said “You will never know what Julian knows”.

Subsequently, I asked him, again, what he knew and he said that Assange’s days are numbered. Ecuador’s government will likely give up Assange to Obama and Clinton. He said he had information that the Ecuadorian government was hit with the kitchen sink. My source went on to say that the leadership of the government was told that if they persist in letting Assange do what he’s doing, that there will be severe economic disruptions and even assassinations if Assange is permitted to continue. I asked if this was strictly the work of the Clinton criminal enterprise and I was told that this goes much higher, but that they are operating in Clinton’s behalf. In short, Obama is pulling out all the stops along with the Bank of International Settlements to stop the damning information from coming out.

As most people know, Ecuador’s embassy was attacked in late August and presumably Assange was the target. The British authorities took 2 hours to respond to a crime that was less than a 2 minute walk away.

Subsequently, we have seen the last of the WikiLeaks revelations unless the Ecuador’s government is willing to risk ending up like Venezuela.

Ask yourself this question, if Clinton’s allies are willing to do this to a sovereign nation, how far will they go to steal the election? Clinton will become President at all costs.

No doubt Putin would like complete the double play of propaganda and rescue Assange and give him asylum along with Snowden.

Meanwhile, the people cannot be permitted to hear the truth.

It was only a matter of time. Assange was trying to discredit the global elite’s chosen President, even if she might be brain dead by the time of the election, and they are not going to allow him to do that. Perhaps he might finally learn how the world REALLY works and that the people who ACTUALLY run the game are just around the corner from him.

Once again, James Corbett calls it like it is:

You have no doubt heard by now about the precarious situation that Deutsche Bank finds itself in, including the impending US government fine for selling faulty mortgage-backed securities in the run up to the financial crisis. The lamestream media is busy running stories about German bailout rumors, and bank’s uncanny ability to not quite die…yet. But in case anyone is tempted to draw comparisons with the 2008 financial crisis, rest assured that the failure of Deutsche Bank would be no “Lehman Bros. moment.” It would be incomparably worse.

Deutsche Bank is not just one of the largest banking and financial services companies in the world (although it is that). It is also one of the most inter-connected banks in the world. As the IMF helpfully pointed out earlier this year: 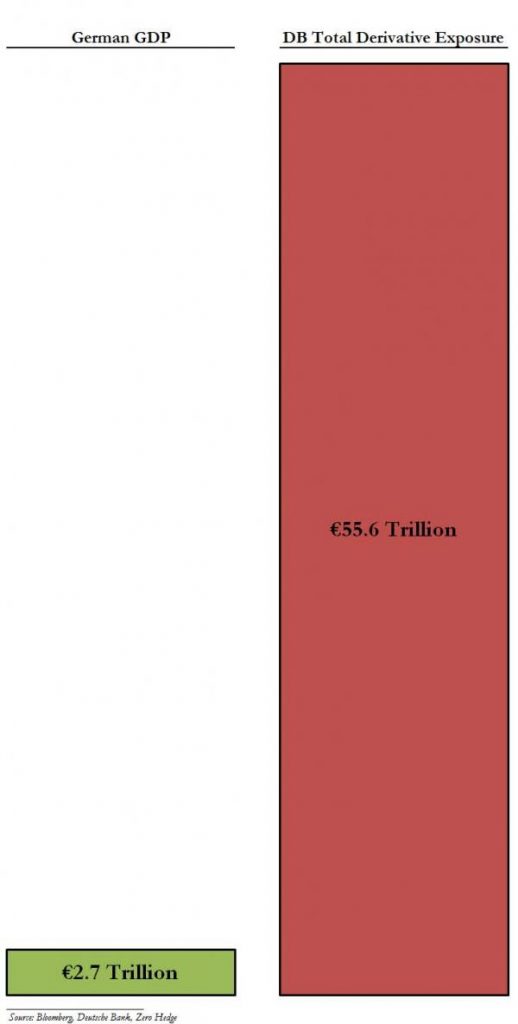 Does that look frightening? Well, don’t worry. Deutsche’s derivative black hole has been pared back to a much more modest 46 trillion or so euros, a mere 15 times German GDP.

Does that make you feel any better? I didn’t think so.

It’s not if with Deutsche. It’s when.

And the counterparties began to pull their cash out of Deutsche last week.

Not long to go when that starts.