French weatherman fired for his book to cover COP21 on RT

One month before the climate summit being held in Paris, Philippe Verdier, a popular French weatherman was fired by France’s channel two. He had published a book claiming that scientists and politicians are generating hype around climate change – and making the world needlessly afraid.

Modern Turkey: a secret Zionist state controlled by the Dönmeh

Although known to historians and religious experts, the centuries-old political and economic influence of a group known in Turkish as the “Dönmeh” is only beginning to cross the lips of Turks, Arabs, and Israelis who have been reluctant to discuss the presence in Turkey and elsewhere of a sect of Turks descended from a group of Sephardic Jews who were expelled from Spain during the Spanish Inquisition in the 16th and 17th centuries.

These Jewish refugees from Spain were welcomed to settle in the Ottoman Empire and over the years they converted to a mystical sect of Islam that eventually mixed Jewish Kabbala and Islamic Sufi semi-mystical beliefs into a sect that eventually championed secularism in post-Ottoman Turkey. It is interesting that “Dönmeh” not only refers to the Jewish “untrustworthy converts” to Islam in Turkey but it is also a derogatory Turkish word for a transvestite, or someone who is claiming to be someone they are not.

The Donmeh sect of Judaism was founded in the 17th century by Rabbi Sabbatai Zevi, a Kabbalist who believed he was the Messiah but was forced to convert to Islam by Sultan Mehmet IV, the Ottoman ruler. Many of the rabbi’s followers, known as Sabbateans, but also “crypto-Jews,” publicly proclaimed their Islamic faith but secretly practiced their hybrid form of Judaism, which was unrecognized by mainstream Jewish rabbinical authorities. Because it was against their beliefs to marry outside their sect, the Dönmeh created a rather secretive sub-societal clan.

Many Dönmeh, along with traditional Jews, became powerful political and business leaders in Salonica. It was this core group of Dönmeh, which organized the secret Young Turks, also known as the Committee of Union and Progress, the secularists who deposed Ottoman Sultan Abdulhamid II in the 1908 revolution, proclaimed the post-Ottoman Republic of Turkey after World War I, and who instituted a campaign that stripped Turkey of much of its Islamic identity after the fall of the Ottomans.

Abdulhamid II was vilified by the Young Turks as a tyrant, but his only real crime appears to have been to refuse to meet Zionist leader Theodore Herzl during a visit to Constantinople in 1901 and reject Zionist and Dönmeh offers of money in return for the Zionists to be granted control of Jerusalem.

Like other leaders who have crossed the Zionists, Sultan Adulhamid II appears to have sealed his fate with the Dönmeh with this statement to his Ottoman court: “Advise Dr. Herzl not to take any further steps in his project. I cannot give away even a handful of the soil of this land for it is not my own, it belongs to the entire Islamic nation. The Islamic nation fought jihad for the sake of this land and had watered it with their blood. The Jews may keep their money and millions. If the Islamic Khalifate state is one day destroyed then they will be able to take Palestine without a price! But while I am alive, I would rather push a sword into my body than see the land of Palestine cut and given away from the Islamic state.”

Unless we understand the game we have no chance, in this consciousness, of changing it.

Sweden: ‘No Apartments, No Jobs, No Shopping Without a Gun’

There is little coverage in the MSM about the horrific social cost across Europe from the flood of so-called Syrian refugees – and we should expect nothing different, since they promote the agenda of the global elite. Actually, the MSM is owned by the global elite.

Here is a report out of Sweden:

The week after the double murder at IKEA in Västerås, where a man from Eritrea who had been denied asylum grabbed some knives and stabbed Carola and Emil Herlin to death, letters and emails poured into the offices of Swedish Prime Minister (PM) Stefan Löfven. Angry, despondent and desperate Swedes have pled with the Social Democratic PM to stop filling the country with criminal migrants from the Third World or, they write, there is a serious risk of hatred running rampant in Sweden. One woman suggested that because the Swedish media will not address these issues, Löfven should start reading foreign newspapers, and wake up to the fact that Sweden is sinking fast.

Europe as the world has known it, has ended. Closing borders now is too little too late. And with few exceptions – as you should expect – the politicians are complicit because they, too, are owned by the global elite.

It’s how this world works.

The unfailing pattern of drills on the day of false flag events, including Paris (twice)

Many people have noticed that officials have held a drill on the day of these so-called terror attacks in (from what I’ve seen) every case.

This video covers the specifics of the recent Paris attacks, including catching a French official flat footed, and discusses several of the other cases. The video doesn’t include Sandy Hook, amongst others, but it was true at Sandy Hook, also.

Worth a few minutes to watch.

And whilst I’m on Paris, I love this alternative approach to demonstrating in the wake of the COP-21 protest bans. 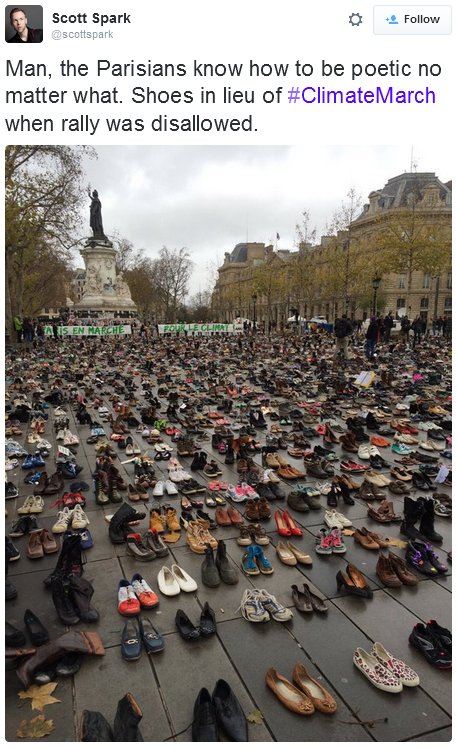