Most Americans have no idea their country is now an occupied nation with a foreign based enemy inside its Gates. This enemy has infiltrated and taken control of America. It is now instituting a Globalist NWO Agenda by using acquired American political, military and economic might. It’s incredibly evil Agenda includes the deployment of false-flag terror to produce the massive chaos necessary to justify foreign wars of aggression for profit and the creation of a large American secret police (DHS). It also includes the step-by-step, planned complete asset stripping of all wealth and property from Americans and the destruction of America by removing its borders and debasing its language and culture.

Sadly most Americans have no idea that America is occupied by the World’s largest Organized Crime Syndicate, the Khazarian Mafia (KM) which is a Globalist NWO Crime Cabal with an incredibly sinister, Evil Agenda for America and the whole World.

It’s time for them to become informed about who has infiltrated and hijacked America, how they did it and what is their notably Evil Agenda of hate, engineered conflict at every level of society, tyranny, terror and war for profit, asset stripping, mass-death and incredible human suffering. All designed by using the age old strategy of Divide and Conquer.

We now know for certain that America was infiltrated in 1913 by the Khazarian Mafia’s private Central Banksters and is now a nation occupied by them.

As I’ve said before, the efforts of Paul Warburg in setting up the Federal Reserve – his mission in coming to the United States – was the last element in this takeover, and far from the first.

Someone else saw through Maurice Strong:

I see that Maurice Strong has at last shuffled off these mortal coils and gone to meet Lucifer, his Lord and Master. Although not well known by the general public Strong was the mastermind behind the notorious Agenda 21, one of the UN’s main planks for NWO World Government. He also played leading roles in the World Bank, the Commission On Global Governance, the Earth Council Alliance and literally dozens of other such subversive organisations. His list of close associates reads like a NWO rogues’ gallery and included George Soros, Al Gore, Armand Hammer, Saul Alinsky, the Rothschilds, Bill Gates, Paul Ehrlich, Jeffrey Sachs, Peter Sutherland and Larry Summers.
Although claiming to be ‘a socialist in ideology, a capitalist in methodology’ he was in fact neither. His socialism, as with that of so many other charlatans, was a mere flag of convenience to mask globalist ambitions, while his capitalism was nothing more than the acquisition of vast wealth through crony capitalism at its most corrupt. An exemplar was the Chicago Climate Exchange (CCX) which he set up with Al Gore to operate the cap and trade system for greenhouse gasses. Here Gore and Strong in effect bought their carbon off-sets from themselves and then traded them on, making vast fortunes in the process. He also made a corrupt fortune operating the notorious Iraqi oil for food program. In fact Strong became so mired in corruption that, despite his powerful connections, he was eventually forced to flee to China where he spent the last years of his life.
The following will give you a sense of his true objectives:
“The Earth Summit will play an important role in reforming and strengthening the UN as the centrepiece of the emerging system of democratic global governance”
“The concept of national sovereignty ……will yield only slowly and reluctantly to the new imperatives of global environmental cooperation”
“Further, since the world today is in the process of becoming one, and since the major aim of UNESCO must be to help in the speedy and satisfactory realization of this process”
Studying the activities of Strong and his ilk will confirm that Climate Change is a racket and remove any reservations you might have regarding the reality of plans for a globalist NWO. And enhances the suspicion that Mr. L. might indeed be somewhere in that mix.

I found this interview very interesting. Former Swiss Banker Francois Siebenthal discusses his experiences at the highest levels of International banking and why he left to work with an approach to banking that supports the public. He reveals how a banker needs to join a secret society that practices satanic behaviours to progress, and how the global bankers control the world, and how they are working to destroy Switzerland and what it represents.

One key thing he discusses in detail is how there was no usury in France prior to the French Revolution, and it is a key reason for the wondrous flowering that was France. Any country that has operated without usury has flourished. He says usury was one of the first things introduced with the Revolution. No prizes for guessing why, given who drove it.

Confession of a CIA Agent: They Gave Us Millions to Dismember Yugoslavia

Yet another background story of how politicians are manipulated and countries destroyed:

We bribed parties and politicians who have enticed hate between the nations. Our ultimate goal was to enslave you!

WebTribune publishes their interview with former CIA agent Robert Baer during his promotion tour in Quebec for upcoming book “Secrets of the White House” last week.

My boss, who was formerly a US Senator, stressed repeatedly that some kind of scam would go down in Bosnia. A month before the alleged genocide in Srebrenica, he told me that the town would be headline news around the world and ordered us to call the media.

Robert Baer, a former CIA officer, has authored many books which disclosed the secrets of both the CIA and the administrations of Bill Clinton and George W. Bush. He has been arrested and detained several times. Mitt Waspurh, a personal friend who worked at the Senate and shared information was killed at gunpoint. As a senior CIA operative, Baer worked in Yugoslavia during the 1991-94 period and in the Middle East. He has worked on several documentaries on National Geographic, accusing the Bush administration of waging war for oil.

Bertrand Russell warned us about vaccination and modern education in 1952

In his 1952 book, “The Impact of Science on Society”, Bertrand Russell gave us forewarning about the plans for the use of vaccination, education and other practices to control the populace. And Russell was a well-recognised NWO insider.

Scientific societies are as yet in their infancy.

It may be worthwhile to spend a few moments in speculating as to possible future developments of those that are oligarchies. It is to be expected that advances in physiology and psychology will give governments much more control over individual mentality than they now have even in totalitarian countries. Fichte laid it down that education should aim at destroying free will, so that, after pupils have left school, they shall be incapable, throughout the rest of their lives, of thinking or acting otherwise than as their schoolmasters would have wished. But in his day this was an unattainable ideal: what he regarded as the best system in existence produced Karl Marx. In future such failures are not likely to occur where there is dictatorship. Diet, injections, and injunctions will combine, from a very early age, to produce the sort of character and the sort of beliefs that the authorities consider desirable, and any serious criticism of the powers that be will become psychologically impossible. Even if all are miserable, all will believe themselves happy, because the government will tell them that they are so. (My emphasis)

I shared the essence of this with you previously, but it is just so clear and so important in our time, as we live with the reality of these plans. It also overlaps with the content of this Aldous Huxley speech from 1962. The two Huxley brothers were also key NWO insiders.

Maurice Strong, the NWO father of anthropogenic global warming and Agenda 21 is dead

Maurice Strong, whose work helped lead to the landmark climate summit that begins in Paris on Monday, has died at 86, the head of the UN’s environmental agency said Saturday.

I have written about this horrific individual in the past.

So, was he sacrificed to give a little piquancy to the COP-21 process in Paris next week?

The timing cannot be ignored.

I have been aware for some time that the funding for Mao came from Russia and directly from the global bankers, but I hadn’t realised there were key Jews in supporting roles. 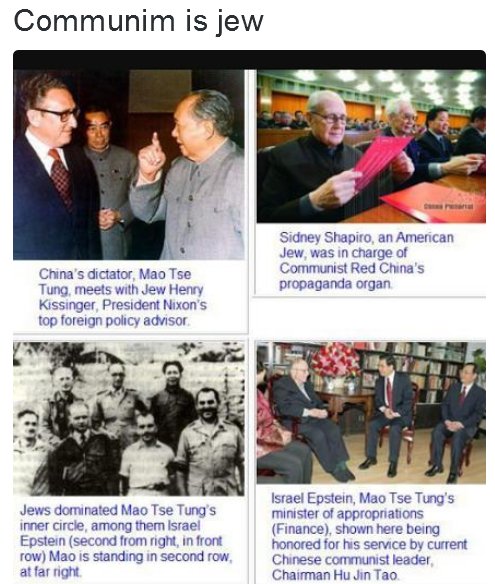 The above reports Sidney Shapiro as being in charge of Mao’s propaganda machine (perhaps to be expected since propaganda was made an art form by Jewish Zionist Edward Bernays) and Israel Epstein controlling the finances – for quite a long period, it seems.

So, Mao’s “revolution” saw the last major country to fall under Zionist control. All carefully hidden from public view and certainly not taught in history class.

And no surprise it involved such horrific carnage and rolled out the totally dysfunctional one child policy, the “benefits” of which they are reaping today.