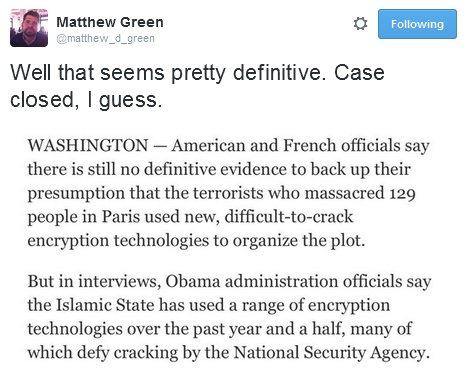 I have allowed a few days to pass before commenting upon the events of last Friday in Paris.

Firstly, some people’s initial reaction was, “This was too large an event to have been a false flag”.

To those, I refer you to Chapter 1 of James Perloff’s book “Truth Is a Lonely Warrior”. This chapter is called “Six Wars”, and Perloff discusses six false flag events that led to those wars or the US participation in them. I use the term in its broadest sense in that it includes events that were allowed to happen whilst authorities feigned ignorance when they knew well before what was planned:

“Considering that the Soviets did nothing to win the Pacific war, North Korea was an enormous trophy to give the dictator Stalin, well known to have murdered millions of his own people. Stalin swiftly established a communist government under Kim Il-sung in North Korea, and equipped him with the tanks, MiGs and other weapons needed for the 1950 invasion – which could have been completely avoided had we not made overtures to Stalin to bring him into the Far East.”

“President Johnson described the first attack as an “unprovoked assault” against a “routine patrol.” Actually, the destroyer was supporting a South Vietnamese military operation against the North.

“The second attack never occurred at all.”

And there are many other examples I could give. In simple terms, wars, at least in the last 200 or so years, have been created to serve the interests of the global elite, and these have led to the death of tens of millions of people. In the scheme of things, the Paris attacks are a mere trifling.

Were the attacks in Paris real, or did they involve crisis actors, as many recent events have done? For me, this question is simply a matter of tactics and is a distraction from the main game – the use of terror to advance the globalist agenda.

In my opinion, this interview with an Irish political journalist encapsulates the context and the event most succinctly. I commend it to you.

I have received a report from European security that there was a massive cyber-attack on French systems 48 hours prior to and during the Paris attacks.

Amongst other things, the attack took down the French mobile data network and blinded police surveillance. The attack was not a straightforward DDOS attack but a sophisticated attack that targeted a weakness in infrastructure hardware.

Such an attack is beyond the capability of most organizations and requires capability that is unlikely to be in ISIL’s arsenal. An attack on this scale is difficult to pull off without authorities getting wind of it. The coordination required suggests state involvement.

It is common for people with no experience in government to believe that false flag attacks are not possible, because they think the entire government would have to be involved and not everyone would go along with it. Someone would talk. However, if the report I have received is correct, hardly anyone has to be involved, and security forces are simply disabled.

End of quote. I have not seen any other report of this, and Roberts is no neophyte – “Roberts was Assistant Secretary of the Treasury for Economic Policy and associate editor of the Wall Street Journal. He was columnist for Business Week, Scripps Howard News Service, and Creators Syndicate.”

Also, this article by Roberts:

Just as with 9/11, Charlie Hebdo and the Boston Marathon Bombing, the media was scripted with the story and ready to go the minute the happening was reported.

There is no investigation, no questioning, just the media moving in lockstep with the scripted official story. Again the perpetrators conveniently leave their ID. Again the attack coincides with an official drill of the attack. No matter how transparent the false flag attack and the agendas served by it, patriotism whipped to a frenzy blinds people to the reality.

But, for me, the two elements that shriek of a false flag are these:

Expect more restrictions in many forms in the coming days and weeks. You see, it doesn’t matter if lots of people wake up to what’s going on. The wheels of this monster act upon the meme they have created, as if it were true, and it’s very difficult to put humpty dumpty back together again. It doesn’t matter that the Holocaust was a lie or that 9/11 was a false flag event. The world we live in is a result of those in power acting as if they were true, and you can’t bring the Iraqis or the Palestinians back to life, nor (currently) remove the “depleted” uranium projectiles from the Iraqi landscape, which continue to kill and deform countless numbers.