May 3, 2015 Richard Presser Uncategorized No comments

Whilst this interview dates from 2003, from what I can see, it summarises Noam Chomsky’s currently expressed view of the world.

Chomsky is seen by most as a deeply considered, intellectually principled leftist figure who sees the United States as the world bully and seeks to hold them to account.

There are two key issues about Chomsky’s expressed view of the world that trouble me:

This is well spelled out by Jim Fetzer, here and also here, and Chomsky’s views about 9/11 were still being expressed as recently as late 2013, when he responded to a question  about the destruction of Building 7, the collapse of which, unsurprisingly, is not acknowledged in the recently opened 9/11 memorial in New York. Now, you might argue that there is some professional bias in Fetzer’s views on Chomsky, given their competing views on the nature and origins of language (neither of which, as I understand it, give any credence to the nature and the existence of consciousness beyond the temporal domain and hence, in my view, are both flawed), in my view, Fetzer’s comments about Chomsky’s position on 9/11 and the JFK assassination stand alone.

Now, it does not take a great intellect to understand that the only conditions under which buildings fall down at freefall speed into their own footprint is when they have been demolished. And you can’t demolish them by flying an aeroplane into them high up. You have to remove each floor below the one above for each to fall freely; that is, demolish it from the bottom. If Chomsky has researched this as thoroughly as he claims, how can he miss this? He simply can’t. You may not agree with Chomsky, but you cannot deny the man has intellectual horsepower.

So, why does this highly intelligent man deny these two fundamental lies in the history of the United States?

For me, this is the fundamental question. Not once, but twice does he deny the obvious, when the man makes arguments of great subtlety in other areas. There is no way that this is chance. The man has chosen this position.

And in my opinion, to understand why, we need to look deeper.

It seems to me, Chomsky is a protector of the darkest secrets. The world at large believes that the United States  is the world’s great aggressor, and practically this is true.

But who controls the United States?

There is a growing chorus of voices pointing to the influence of Israel on the United States, which I agree with, but even that misses the point. There are arguments made that there has been Jewish control of the United States back to the time when Columbus made his voyage, as Henry Ford did in his 1920-1 articles. Even if this is not the case, that control was well and truly sealed with the creation of the US Federal Reserve in 1913 under the guidance of Zionist Paul Warburg, a banking representative of the Rothschilds. And in case you are in any doubt, read how Zionist Bernard Baruch controlled the entire US supply system during WWI (as well as beginning to prepare the American military for war as early as 1915, well before any official plans were in place), an act he repeated during WWII. This is not someone’s opinion; it is demonstrated by Baruch’s own testimony before a US Senate inquiry into his role in WWI. Baruch did not try to hide it.

So, if you look, the evidence that the United States was hijacked at the very least 100 years ago and likely more by the Zionist bankers is abundant and unequivocal, yet this is never mentioned in any mainstream discussion of the unfolding of world events, including the two World Wars of last century. The Zionist bankers, as the ultimate victors,  have written themselves out of history.

So where does Chomsky fit?

In my view, Chomsky’s role is to protect this carefully buried truth. On the one hand, he postures as the great intellect of the left, brandishing fire at the demonic United States, but all the while protecting the hidden hand of the Zionist bankers. For me, it is the only way to reconcile Chomsky’s defence of these two very dark events in American history, both of which carry the fingerprints of the Zionist banking interests that not only control the United States but, in essence, the entire world. Yes, they have many willing helpers, either because they, themselves carry the same satanic predisposition (e.g.  the Du Pont family) or they are co-opted through their desire for power and are willing to pay the price (eg Skull & Bones members).

Until and unless those who rail at the state of our world begin to recognise this, including the many Jews who have been hoodwinked by the propaganda of the few and take articles such as this as an attack on them and their kin when it is not, we will make little progress in picking this game apart.

May 3, 2015 Richard Presser Uncategorized No comments

This article provides a snapshot of what GMO products Americans already consume, as well as the total number of varieties of each that have been created and by whom. I quote:

Since GMOs were approved for commercial use, and then first planted into U.S. soil in 1996, their production has increased dramatically. More than 90% of all soybean cotton and corn acreage in the U.S. is used to grow genetically engineered crops. Other popular and approved food crops include sugar beets, alfalfa, canola, papaya and summer squash. More recently, apples that don’t brown and bruise-free potatoes were also approved by the FDA. 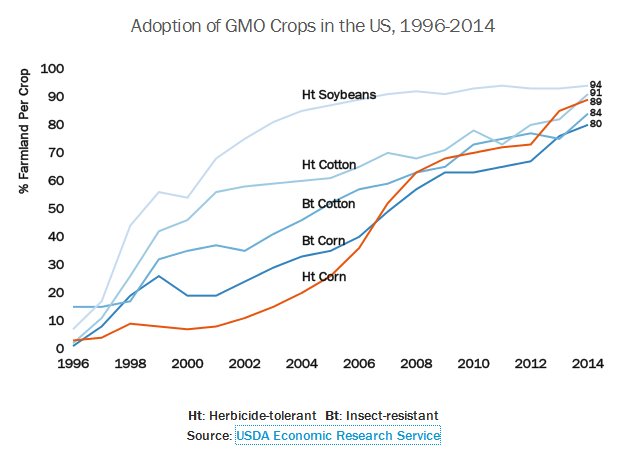 The bar chart below shows all deregulated crops, sized by the number of genetic varieties approved for each. The ten crops in green are currently produced in the United States. 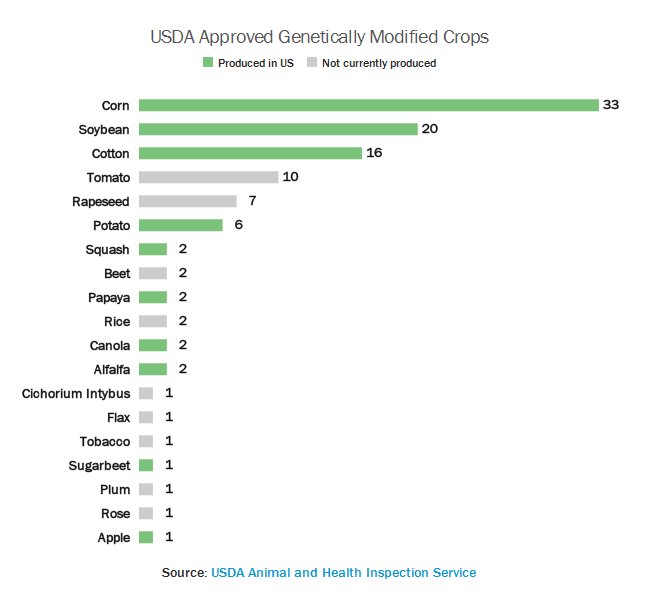 The consequences of this for the health of Americans and with time the world if this is projected forward is horrific.

But that’s what they want…